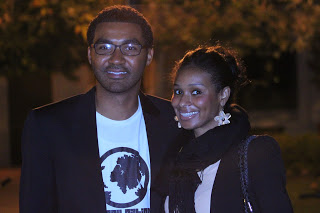 Director of Photography, Delmar Washington of Beyond The Echo Of The Drum and fiance Heather Morris

On a beautiful hazed filled night that was neurally satisfying, three bold new film production crews made their 2012 thesis presentation from the NORRIS THEATRE, located on the campus of USC.Â  547 SPRING 2012, as it was called on their promotional cards, were well represented both culturally and intellectually. These three but very different focused documentaries, were brilliantly executed and delivered hands down to a very eager and supportive audience.Â  A well blended mix of future studio heads and outstanding independent filmmakers played their cards and they aced it.Â  The first up in it’s skinnys was BINGO NIGHT Directed by, Conor Fetting Smith, Producers, Patricia Pham & Annabel Seymour, Director of Photography, Alex Parker.

Editors, Dan Shulman-Means & Michael Moncrief and Sound, Kristin Fione & Tamara Shogaolu made it happen. Bingo Night brought focus to a very different group of talent who discover the popular movement of Bingo and now use it for therapy, fun and a means to make money.Â  Broadway actress, Janet Gerard, finds home and a place to love, laugh and sing to a large group of fans who play Bingo regularly. There were insightful characters who, by some standards are valid actors and artists. The cult like followers of the game always have a place to steal away to. A very freeing sort of experience, it’s practitioners are able to let go of all inhibitions.Â  Bingo Night will make you laugh so hard that you might not be able to stop.

THE WEEKLY was so dog-gone precious it brought tears to your eyes.Â  If you didn’t know, now ya do. a young reporter, Melanie Anderson ( who has yet to discover that she has the natural talent to be a reporter) snoops out a good lead, she calls this lead, a job hunt. This job hunt leads her to a local newspaper, the Beverly Hills Weekly.Â  Interestingly enough Melanie begins to get hands on experience working daily with publisher, Josh Gross. She has to develop her talent through diligence, saavy and persistence all while enduring a few long and tear filled nights. Anderson discovers the real reason of why she wanted to be a journalist.

Josh has seen lots of good journalists come and go and having a similar career climb as Melanie’s he can relate to the long and grueling hours that go hand and hand with a publishing work schedule. He wonders if Melanie can handle the pressure of a small, niche targeted newspaper. Â  Anderson and Gross gradually come to trust and gain respect for each other.Â  In a united effort they take on the challenge of staying in the print game, despite the onslaught of readers who now follow social media.Â  The Weekly is Directed by, Eric Marshall, Produced by, Bernardo Duran, Jr. & David Esfeh. Director of Photography, Sean McDaniel.

Editors, Bryce Kho & Brian Ott.Â  On Sound, Andrew Aidman & Zack Ketz.Â  The final but certainly not lacking in genius film documentary, was the aggressive call to arms made felt by Lori WebsterÂ  Directed, BEYOND THE ECHO OF THE DRUM.Â  We found Webster’s interpretation to be a deep and emotionally profound look at a known but not well publicized area in Los Angeles, named Leimert Park.Â  Producers, Jamari Perry and Chao Thao who are kindred sisters with a common cause, join forces with Lori as they transform the eye of the viewer into a motivated champion who stands tall for tradition and culture.Â  Director of Photography, Delmar Washington captures an intense and riveting account of imagery showing Leimert Park businesses, community icons and it’s actively concerned but familiar neighborhood dwellers.

The citizens of Leimert Park, a largely African American collective are given a voice as the Producers and Director, give the public a wonderful and true list of things to think about.Â  A public outcry is heard while the neighborhood undergoes gentrification.Â  Editors, Melanie D’Andrea & Jihye Kwon and sound men, Mahim Ibrahim & Tarik Jackson managed to put a velvety layer of color and artistry combined with a bit of charm as told by, the voices of Leimert, and narrated by Leimert Park and LA Comunity Activist, Damien Goodman. The Leimert Park drum Circle and it’s comparable World Stage boasts of musical favorites like, Dwight Trible and Founder, Billy Higgins who have become experts at maintaining a cultural identity through the programs offered by the center.Â  Higgins describes a vibrant community that has been on the rise since the early days of the 80’s popular and now defunct, Fifth Street Dix.

The World Stage has inspired a similar drum circle not too far from it’s doors.Â  Lula Washington Dance Company staked its ground in Leimert by continuing the rich tradition of African dance and culture.Â  Its staff, which includes Washington’s daughter, have a variety of programs offered to anyone who has an interest in dance and African history. The Company has a broad curriculum and a much needed presence in the Leimert Park district.Â  This entire evening’s event was well received well worth the time, the attention and the wisdom gained.Â  This has been another Ankh Entertainment Productions, Stones In The Color Of Rare.Â  We’ll mark these stones and place them our bag, of rare ones.Â  They should fit quite nicely although they have a special coloring all their own.