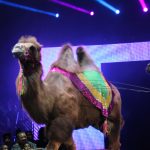 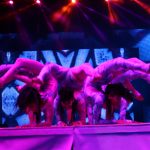 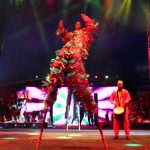 Creating one variety act show could not have been easy, and now two?Â  In 1994 â€œUniversoul Circusâ€ had its first pitched tent event at its home base of Atlanta. The idea of having performing talent interspersed with trained circus animals sprung out of the genius and progressive thinking of founder, Cedric Walker. Walkerâ€™s early industry experience included producing the first, â€œFresh Festival Tour,â€ whose lineup included hip-hop icons, Run DMC, Salt â€œNâ€ Peppa and The Fat Boys.Â  Walker then went on to form Universoul.Â  While on its yearly run, this yearâ€™s 2013, â€œMASH IT UPâ€ tour did just that selling tickets at affordable prices, and set as such, for the entire family. Â The Big TOP stands tall at Inglewoodâ€™s Â â€œHollywood Park,â€ Gate 2, until March 30th. Â www.universoulcircus.com.Â  Strength and courage led Walker to develop since the Circusâ€™ first inception, a moving puzzle like, entertainment touring act, that could function inside of a two ringmaster tour module. The two ringmaster modules are able to simultaneously interconnect with 32 city scheduled tour dates. The show is completely interactive.Walker and his production staff 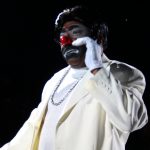 kept a cool head this year, by presenting in neon, an array of colorful backdrop images. Â 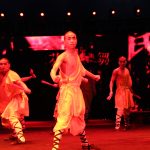 They chose the use of onstage standard and varied colored gel lights, to highlight the shows exotic costuming and to elevate the crowdâ€™s excitement. Â Each backdrop matched the performers in color, attitude, intent and focus. Trust when we tell you that all eyes were on the ring.Â Â  Universoul Circus ranks among the third top performance shows in the world. The soul circus stands alongside Ringling Brothers Barnum Bailey, Cirque Du Soleil and is the first of those top three to use a music bed, driven by hip-hop, jazz, R&B, soul, gospel, and pop to engage audience participation.Â Â  The show takes an assortment of diverse talent from all over the world and houses them under a pitched tent. Casual Cal Dupree a mainstay and part of the shows 20th year historical figures still excites and stimulates the senses, with his masterful array of colors and Bootsy Collins flair for style.Â  Casual Cal, as is his cohort in crime, Shuckey Duckey, known for the phrase Shuckey Duckey, Quack Quack are this yearâ€™s tour ringmasters. Â The two enthusiastically announce the opening and probable gateway to both a visual, emotional and ear-delicious experience.Â 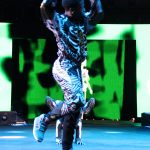 The â€œMASH IT UP TOURâ€ includes Chinese Shaolin Acrobats and Breaking News Cast an interesting adaptation of any local television news room.Â  The two Lil People from the Ivory Coast who come out dancing as ringmaster sidekicks with Cal, kept the 2500 attendees glued to their seats. Â The acrobatic pole act, Magic Cat, the Trick Dog Act of France, Soul Ice Skaters and Ethiopian female contortionist soon followed.Â  Â Meanwhile, Shuckey Duckey and his now 54 year old, 4 Â½ feet sidekick, Zeke are in charge of the United As One Gospel Tour. The shows talent boast of gospel royalty, James Fortune, VaShawn Mitchell and Kierra Sheard who are known talent and more than worthy of attention. Â United As One opened on March 1st in Ft. Hood Texas and also stars ballet aerialist French born, Jean Claude, Caribbean Dancers, Soul Circus Dancers. Â Elephants and Tigers, but no Bears or Lions and trainer John Jairo shows off his physical prowess with White Bengal tigers, Onionhead a long time regular to date, models his performance based on the character of Joseph Grimaldi, inventor of the modern day clown. The spectacular acrobatics of Russiaâ€™s Zhukauâ€™s, Russian Swing, not for those who are timid at heart.Â  Finally the Hip-Hop Transformers that Hollywood radar never picked up on, appeared to lift off for a boost, that went way beyond popping a fresh cube of mint filled gum in your mouth. The Universoul Circus is an HBO Emmy nominated show created for all viewing audiences.Â  http://www.youtube.com/watch?v=67hNwyqpkSA.Â Â  For more information on show times and dates please visit www.universoulcircus.com.Â  Facebook, Google + and Twitter your likes for one of the most spectacular shows on earth.