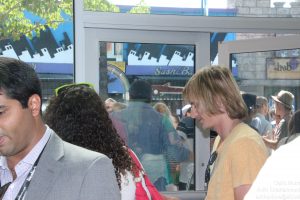 Moviegoers and all lovers of short films, got their chance to attend a showcase of over 280 films arranged and sectioned, into 44 programs at the 17th annual Los Angeles Shorts Film Festival.

The kick off date, Thursday, September 5, sizzled with over 90-degree heat at North Hollywoodâ€™s Laemmle Theatre, where the seven-day event is taking up residence. The shorts fest will run until Thursday, September 12. Each short film is selected, organized into categories, and then assigned to the genres of adventure, animation, comedy, documentary, drama, horror, sci-fi, and themes such as love, family, friendship, conflict, suspense, religion, and art. Shorts selected for screening and competition, feature award winning actors, directors, and filmmakers from over 17 countries worldwide.

There were some great shorts featured on opening day and greater ones expected throughout the festival. â€œSolelyâ€ produced and written by Madia Hill, directed by, Anna Nersesyan was one of many fantastic and brilliantly written, produced and directed shorts. â€œSolely,â€ presents us with the old adage that a picture is worth a thousand words. Madia Hill stars in the film as well, along with actor, Toy Lei. Hill seduces the audience by showing slithers of creative and artistically choreographed dance scenes while tackling the sensitive subject of abortion. Things become complicated as Madia is faced with the reality of making the tough decision all by herself. As she comes to grips with having to face the situation alone, director Nersesyan gets led us into emotional depth while tweaking the many moods of the viewer. â€ Solely,â€ expresses a universal truth that all women could be faced with and offers solace to the audience in its approach to womenâ€™s rights issues. Â Â

Â â€œShayaâ€, written and directed by, Amir Noorani and produced by, Mike Gut and Eric Bergemann. 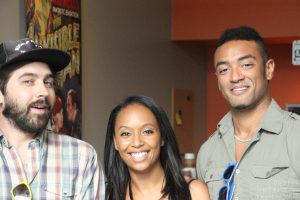 This highly charged shortâ€™s theme was based around a Pakistani family sent to live in America. The familyâ€™s perception of America quickly changes after young, â€œShaya,â€ along with his mother, encounter local neighborhood bullies while carrying groceries home from the local market. The plot thickens when â€œShayaâ€ is forced to look for money and food after being robbed and beaten by the bullies. The bullies are caught off guard, when one of their own helps â€œShayaâ€ escape after witnessing him steal a bag of groceries. Things get very out of hand when the neighborhood encounters tragedy. This short focused on cultural differences and gives a glaring example, of how in truth, all impoverished communities around the globe are faced with lack of education, lack of food, lack of clothes and lack of the proper nourishment of spirit.Â

Produced by Jude Roth, Reena Dutt and directed by Heather de Micheleâ€™s â€œEl Doctorâ€ proved a worthy opponent as a short for consideration. When husband and wife homeowners pick up two Mexican workers a chain of events are set in motion. Dark shadows are cast upon sunny skies, when one worker, after asking to use the coupleâ€™s bathroom to wash his hands, falls upon unfortunate circumstances. The worker is falsely accused, after he is seen in the bathroom talking with the coupleâ€™s young son. The entire family is suddenly faced, with challenging hard-core mis-perceived views and prejudices, when the two workers are asked to leave. A must see for social and cultural enthusiasts.

Â AMPAS, the Academy of Motion Arts and Sciences considers the winners of each film short genre, for a possible Academy Award nomination. The LA Shorts Fest also gained accreditation from AMPSA in Short Subject.

Documentary. The fest has garnered 44 films that went onto receive Academy Award nominations. This yearâ€™s winners are to be announced at the festivalâ€™s closing night on September 12, 2013. 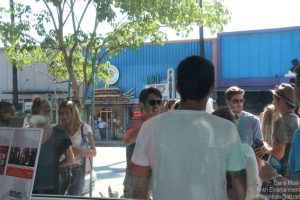 For more information and a complete schedule on LA Shorts Fest visit www.LAShortsFest.com.