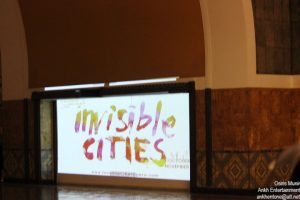 The moving breathing and life changing experience of LA Dance Project, Union Station and Sennheiser’s, partnered art, music and sound Opera project, “Invisible Cities” is ear-resistable. Beginning with an intimate introduction to the Composer, Christopher Cerrone who along with an eleven piece orchestra, delivers a powerful self-propelled libretto that is left entirely up to individual interpretation. Based on the novel by Italo Calvino “Invisible Cities” the listening audience are given headsets to fully participate in the ongoing, no intermission, 75 minute [youtuber youtube=’http://www.youtube.com/watch?v=5LRdPhl_1D8′]performance.Each performer, wows the onlooking crowd with elaborate costumes, dance and movement.[youtuber youtube=’http://www.youtube.com/watch?v=lxIMZjZi6SE’] The listener is allowed to interact with each scene by following the performers to a different room or space. One can sit, stand, be inspired, eat alone, hang out by themselves, or be swept up in a melancholy moment of the love and past emotional experiences of that time. Union Station’s Traxx Restaurant stepped up becoming an integral part of the visual, sound, art mix and handing out one free drink to guest with tickets. Costumed performers interacted with the crowd and aroused emotions that might have been previously stuffed. [youtuber youtube=’http://www.youtube.com/watch?v=1l2gFzVXzoU’]The project is a monumental excursion of the presentation of art and creative restoration. The eyes and ears, for those of you who believe in balancing the left and right brain, are completely engaged throughout the entire experience. Union Station makes for a great backdrop and gives a wonderful setting to fully maximize the iconic Sennheiser powered event.Â  Healthy doses of happiness were provided by the performers who gave a strong rally for diversity including the use of scenes of masked performers and an eclectic mix of dancers. The all of Union Station itself, was a refreshing array of humanity, that looked to be in pursuit of a seduced and evolved state of oneness, bravo for “Invisible Cities”. Opera followers were given an outlined area to walk through, if anyone ventured out too far, specific guides are set to insure that no one ventures away from the real activity, which in this case is the moving Opera itself. The crowd is able to walk around amidst the daily layout of a largely ignored, although not for long, Union Station. WWW.INVISIBLECITIESOPERA.COM, for biographies on all of the artists who were involved in Invisible Cities.Â  www.ladanceproject.com
www.theindustryla.org. WWW.KCET.ORG/ARTBOUND.