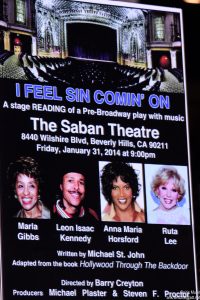 Michael St. John, is Hollywood royalty, he is the cream that always rises to the top. Michael as a teen grew up in the industry and can make claim to being an actor, writer, producer, PR expert, journalist and theatrical performer. When each role that he plays becomes too confining, he simply morphs into another one. When the Saban Theater gave Michael St. John the space to clear his head, come up with a plan, “I Feel Sin Comin’ On’ came to fruition. The plays Grace (Anna Marie Horsford) and Grandma (Marla Gibbs) use the phrase, “I Feel Sin Comin’On”, when they have to confront a situation or circumstance head on. “I Feel Sin Comin-’On”, was used frequently to express discontent and to speak one’s mind.

There were a lot of Broadway productions in Los Angeles during the 40’s-50’s, however Michael heralded from Philadelphia and was just getting his feet wet as he came to know  the City of Lost Angels.

Ebony Showcase, started in 1950 by Nick and Edna Stewart, was a venue capable of putting on quality productions in the Crenshaw area of Los Angeles. Nick, aka as Lightnin’ on the groundbreaking television series  Amos ‘n’ Andy, would also give St. John fuel for the power that would spiral him into all of the right circles. In addition, during that, time there was the Pasadena Playhouse, and people liked to go there. Pasadena City College another loved by all art institute became a popular hangout as well. Most Blacks went to Pasadena to be involved with the theater, which offered them writer’s workshops, rehearsals, and full on productions. 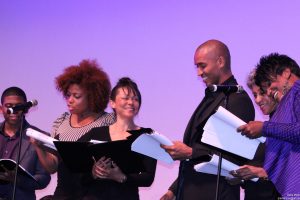 I Feel Sin Comin’On, lost one of its major performers, Ms. Juanita Moore who Michael calls, “mom” and who transitioned on this year’s, January 1. As if that were not bad enough, Nichelle Nichols had to fulfill a previous obligation and could not be a part of the production. With a heavy heart the brave, daring, and consummate performer, used his quick wit and decided to replace Nichols with the amazing, still funny as hell, Marla Gibbs. So what does the tough do, when the going gets tough? The tough, get going and St. John did exactly that, when he had to at the last minute, turn an entire Broadway play into a Broadway styled, reading. Perhaps, his “I Feel Sin Comin’On” gave some righteous flashbacks of intimate images that lie in the deepest crevices of St. John’s head. According to Michael, his father an alcoholic as well, beat him mercilessly then offered no comfort or reassurance.

St. John’s father so severely abused Michael’s mother that the Producer, journalist, and King of “Whats the 411” fought back tears just thinking about that part of his past. An ongoing and numbing pain still acts as a reminder of how his father had watched a neighbor rape him and did nothing. This animalistic act happened repeatedly to Michael as a young man growing up in Philadelphia. Each time, Michael’s father offered no consolation, no hope, and no love. These stored hurts and entrenched emotions became an integral part of Michael’s psyche and would prove to be the driving force for his success. 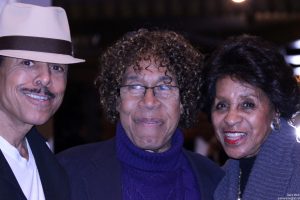 “I Feel Sin Comin’On, in every sense of the word is the story of an American family and a reflection of the broad diversity of St. John’s life. In this case, the family in question is African-American. The Lewis Family. Grace Lewis, (Anna Marie Holsford), the foundation of the family and her broken-spirited and alcoholic husband, Charlie (Leon Isaac Kennedy), have their trials and tribulations like most do. For those who chose a family over career during the 50’s because times were difficult for black folk could be sure that their dreams would never come to fruition. When wise and spirited Grandma, (Marla Gibbs) decides to put her two cents and then some into the family feud that’s when things get jiggy. Miss Mathews (Ruta Lee) promises to give up her position in the local school performance, if the powers that be don’t let aspiring young, Sonny Lewis (Janson Holmes) play the lead in its high school Shakespeare performance. Due to the color of his skin, Sonny experiences frequent harassment from other schoolmates. Drama ensues as the reading takes form and all of the characters begin to interact with each other throughout each scene. Sonny decides that he is not going to give up on his dreams and then shares his plans to go to New York with a high school girl friend.  His high school comrades, Robbie ( Kirk Kelley Kahn grandson of the late Juanita Moore), Johnny Boy ( Alexander Abdul), Shirley ( Wanda Ray Willis), Louie ( Chad Ratto),  Joey ( Ira Gold) and Ida ( Martha Prosper). The head school master, Mr. Thompson ( Paul Mischesin) attempts to keep things calm by having a talk with some of the students who are always causing trouble. As racial tension heats up at school, the headmaster expels a few of Sonny’s best friends.

Charlie, who had his eyes set on being a world champion boxer, is outraged that Sonny wants to pursue acting, singing, and the arts, and calls him a sissy. Sonny vows that he will never speak to his father again and cannot wait until he can put all of the memory of Charlie behind him. 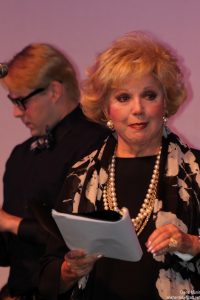 Just as Sonny decides to leave family and friends to continue pursuing his acting career, a tragedy uproots the family and prevents Sonny from leaving. The tragedy proves to be a life lesson of courage for Sonny who is finally able to confront his father.

Confident that he truly has a gift Sonny is able to continue the pursuit of his lifelong dream. 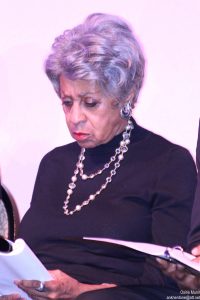 I Feel Sin Comin’On” photos and videos can be found on YOU TUBE under Ankh Entertainment titled, Michael St. Johns I Feel Sin Comin On Brings Laughter Tears and Stars to the Saban and at www.ankhentertainmentone.net.