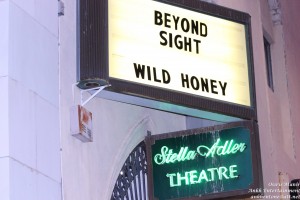 Wow, it’s hard to explain in writing, an emotion about a play that you would have to have been there, to feel what we felt. Directed by, Jeremy Aldridge, “Beyond Sight” is unlike anything I have ever seen. The main character, played by blind actor, Robert Smith, is an amazing piece of honey, babe, if ya weren’t there, you missed it. Hollywood’s, Stella Adler Theater is holding residence with the cast and its production from April 25-May 25, just in time for Memorial Day. You might have heard of Jeremy who has under his belt of experiences and awards Absolutely Filthy, Louis and Keeley, Live at the Sahara or Hobeken with Hollywood (love the name). As we sat in the small intimate seating of the theater, blasting from the speakers was famous 70’s group, “WAR” humming up some, “Slipping Into Darkness”. The plays musical director, Mark P. Leonard and Colin Simson, made the sound hip and up to date creating a perfect fit to Allison Bibicoff,’s choreography.
Immediately, heads bobbed up, then down, and as we saw the dimming of the theater lights, the unseen announcer said, “turn off your cell phones and enjoy the show”. A few minutes later, a vivid and strong visual backdrop reminded the audience, that WAR is indeed, alive and well. “Beyond Sight”, is based on the book by, Nick Sivakumaran and Jeremy Aldridge. 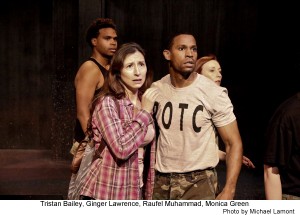 Just hearing the loud guns and cannons reminded me of handsome men in uniforms, their smell, and their eyes. Those just returned from a horrid experience, full of woe, pain and disgust, wounded egos and manhood lost on global battlefields. Silence finally immersed our curiosity into a military camouflaged, character wearing dark glasses. Ok, now was he blind, or just trying to look cool, I asked myself. Suddenly, Jack, played by blind actor, Robert Smith, spoke. 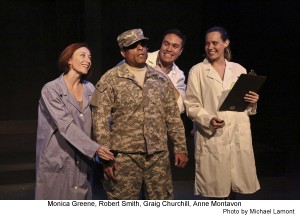 The wooden floored stage echoed as if beneath it were two voices. It was deep and resounding. Smith a consummate performer of Las Vegas’ Ceasar’s Palace, MGM Grand and Mandalay Bay seemed completely unaffected by the fact that he was without sight, physical sight that is. Robert stood as if he could see the faces of all who remained glued to their seats. Lily, Smith’s stage playmate, played by Ginger Lawrence, a 12 year Marine Corps with four deployments to show for her service. Three served in Iraq and one Afghanistan stay. What seemed like mild singing, was actually Lawrence’s ability to let Smith’s deep voice lead, leaving her voice to emit the sensitivity of his experience. The cast made up of Geoffrey Dwyer , who plays General McCord , a top notch vet, who made a verbal agreement with daughter Lily to continue the legacy of having relations with only distinguished military personnel. The actor has appeared in acclaimed productions such as, Carnevil (Sacred Fools), The Night of the Black Cat held at the Edgemar Center and Bent (Aislinn Productions). 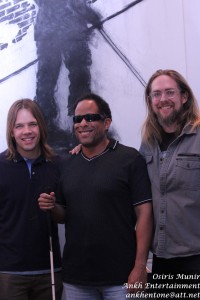 The theater screen backdrop, help to create a fine balance with synchronized movements made by the cast in harmony with the moving images. Sean P. Gorecki, (Kevin) is a writer who lives outside the box, and who happens to have,  to have Retinitis Pigmentosa and continue to sing with groups like, Veritas and Vocal Chaos, all in a capella. His continued involvement with CRE’s, Outreach Theater for the Blind, is nothing shabby, Gorecki has some great talent, and is an actor, to be, dealt with. Christopher Loverro ( Lieutenant Johnson) is an Iraqi veteran with strong theatrical performances with productions, As You Like It, wherein he played Orlando and Much Ado About Nothing’s, Don Pedro. K. J. Middlebrooks (Ty) is known for his roles in Watson, a Scared Fools Production, the ever award winning, Absolutely Filthy and the Magic Bullet Theory. Actor, Raufel Muhammad (young Jack) is known for his raved performances in, Chicago Theater Company’s Being Beautiful, as Afrina’s 1940’s drag queen in heels. Muhammed, walked away with the Black Theater Alliance Award for Best Actor. The actor is also putting in double time performing Marcus Gardley’s, Song of Paradise at the Pasadena Playhouse. 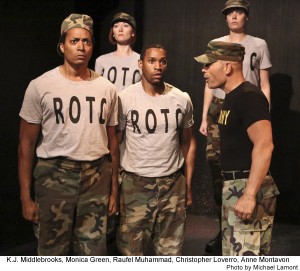 The remainder of the, “Beyond Sight”,  ensemble comprised of Tristan Bailey, Graig Churchill, Monica Green, Chayce Lee, CJ Merriman, Dan Woren, Anne Montavan and Shannon Nelson (Dr. Ness) is a current LA Weekly Award nominee for Best Female in Comedy were so convincing that some people came back to Adler with other guest to see the play a second time.
Greg Shane, CRE’ Outreach, artistic director, has worked with military vets since 2007 and successfully merged  his performing arts program and service connected veterans, who have post-traumatic stress disorders, other medical conditions and the blind, into a successful marketing tool for CRE ( Create Reflect and Empower).  He has created an avenue which allows veterans to express their inner artist. That’s a long time to outreach and make it happen for veterans who along with Shane, prove that they are not defined by their disabilities.
CRE’s reach extends to local theater houses such as, the Promenade Playhouse in Santa Monica and the prestigious Stella Adler, in Hollywood.  Shane and his staff continue to inspire the world to have deeper and more enriching discussions about how family’s, communities and the countries, treat their veterans. 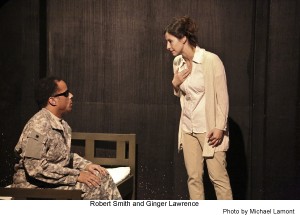 CRE Outreach and Stella Adler Theater’s, “Beyond Sight” opened Friday, April 25, with performances on Fridays and Saturdays at 8:00PM and Sundays at 3:00PM through May 25. Tickets are $30.00. The Stella Adler Theater is located at 6773 Hollywood Boulevard, 2nd Floor, Hollywood, California.  Veterans tickets are discounted to $18.00.  Reservations and Information call (310) 902-8220 www.creoutreach.org. To contact Director, Jeremy Aldridge, and to find out more about how you can help to support CRE Outreach and “Beyond Sight”, contact Lucy Pollak, of Lucy Pollak Public Relations, lucy@lucypr.com.