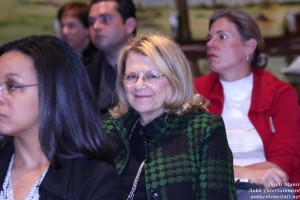 First of all, let it be said, that Southern California has its challenges when it comes to living a comfortable at times, tropical weather lifestyle, all while existing on the edge of a city called Los Angeles. In cryptic code, what we call entertainment, Google labels, as a Hollywood location. Formed in 1982, IWOSC is the oldest and last of its kind. A home-based organization designed to act as a support service for self-employed, independent writers, IWOSC, which stands for, Independent Writers of Southern California, has managed to offer both verbal and written tutorials on the business and craft of writing. Amongst other high-end services, its members gain access to monthly meetings, seminars, and workshops, newsletters that actually have something to say and of course, like any good support team, special events. www.IWOSC.org. 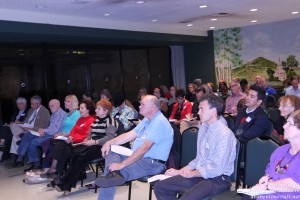 One such event, held at Culver City’s Veterans Memorial Hall, on a rather cool yet pleasant Monday night by IWOSC, drew a full house.The panel for the evening a totally rad, hip, and very eclectic line-up of news reporters dedicated to making life easier for the seated group of budding writers and hopeful, soon to be paid journalist. The room was quiet, echoing only the voices from the five-member panel. Interestingly enough President, Flo Selfman, had a few words, or should I say, breaths to take before opening the floor to speakers all while, holding the thought of, “I Am-(deep breathe) at Peace”. In addition, a step ahead of others, Flo has the ability to create an incubator within an organization that is protective of its inhabitants. Perhaps her diligence in making IWOSC work and continue to grow is partly due to her lending her talent as a contributing writer for the MM blog, which is tastefully called, “How NOT to Work a Room.” http://mediamagnetism.org/guest-blogs-2/www.wordsalamode.com. Gary Young holds the position of Director of Professional Development for IWOSC.The evening’s panelists were as follows, Lawrence Davis self-employed writer since age 17. Davis is founder and publisher of Splash Magazines,  a group of 21 online worldwide city magazines specializing in lifestyle entertainment, offering 10 main sections and 75 subsections including Style and Fashion, Travel Leisure, Entertainment And Food Beverage +. Linda Grasso, should you ever meet her, is brilliant and a media’s digital dream. Grasso is co-founder and Editor-in-Chief of Ventura Magazine. Published every six weeks the digital, print and TV journalist, covers lifestyle in the San Fernando Valley. Grasso is an industry must have, if you find yourself in need of a media consultation or a polished strategist able to provide a customized on- air training service for both television and digital. Abigail Lewis, who began her career as an actor, became the editor of a publication that had packed its bags headed for nowhere. When Lewis gave it a once over using a basic technique called caring, ingenuity and perseverance it stood on its own legs and grew to be, the now infamous, Whole Life Times. As the editor of WLT, Abigail uses her natural nose for assigning and editing compelling narrative stories.  Whole Life Times and Abigail Lewis are a perfect pair, balancing intricate stories that relate to our alternative health options as well as offering consistent tracking of spiritual disciplines. 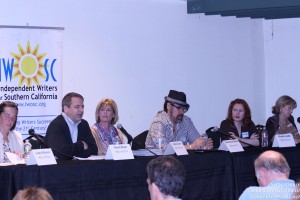 Widely published poet, freelance editor and published author, Mende Smith, gave the attentive audience a taste of an artist who has taken to pen. In the opinion of LA Free P. Publisher, Steven M. Finger, she is an expression of the living shaman, of all that is capable of synchronizing with the net. LA Free P described by many as a virtual newsroom, houses a variety of staff writers, techies, creative types and a host of contributors who keep the press well, Free. The paper has been in the loop since the 60’s and is a prime leader for the free press do or diers. Laura Meyers, legendary moderator of the evening kept the flow of conversation, positive , yet firmly focused on the business of writing. A former “stringer” (reporter) and journalist, Myers has managed to maintain a sustainable career in a had to be tough field for women. Past president and co-founder of IWOSC, Laura’s creative repertoire includes writing for such magazines as, Town & Country, Los Angeles Magazine, Variety’s “V” Life, Paradie, Money, Playgirl, Art Business News, and the Angeleno.

Jason Dean, Managing Editor, C-Suite Quarterly. Jason Dean earned his BAA in Journalism from Central Michigan University. He spent a year covering the arts and entertainment scene for his hometown newspaper, The Bay City Times, before moving to Los Angeles to pursue a career in music. He recorded and self-released two albums before shifting his full-time focus back to journalism. Jason spent four years as a senior production editor in the journals division at SAGE Publications. He also served as assistant managing editor for the Human Factors and Ergonomics Society. He joined C-Suite Quarterly in 2010 as a senior writer and has served as the publication’s managing editor since 2011.

To find out more about the upcoming events and topics of discussion, please visit, www.iwosc.org or call (310) 773-8075 to view full photos of IWOSC seminar and panel