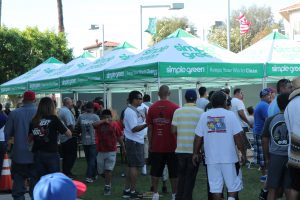 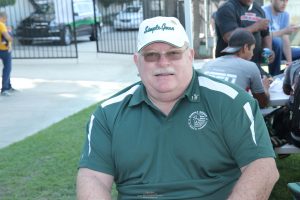 Sunshine Makers, Inc .did justice this past weekend for the global handball movement. The prestigious US Open of Handball classic event was the original idea of FaBrizio and Naty Alvarado, Sr the events Director. Alvarado, handball icon and known as the world’s greatest handball player, welcomed this year’s aspiring players to the 24th Annual Naty Alvarado Handball Classic. The tournament started on October 24-October 26th,at the Los Caballeros Sports Village in Fountain Valley, CA, and drew sports enthusiasts from both near and afar. A large crowd quickly gathered inside and out of the popular sports village to witness a hefty $200,000, awarded across several divisions, purse for this year’s winner.  There was food, family, fun and most of all, handball. All eyes were on one-wall wizard, 22 year old Timbo Gonzalez, slated to be the big winner this year.

FaBrizio started Simple Green the biodegradable, non-toxi c , non-flammable and non-abrasive all-purpose cleaning product with his father during the late 70’s. FaBrizio’s father witnessed a cleaner’s death from a cleaning accident in 1975 using hazardous cleaning supplies containing tannic acid. Three years later after the success of the initial batch of the new cleaner, FaBrizio found a loyal customer base in local automotive and industrial customers at that time and began to sell 55-gallon drums of the green stuff to them, for use on their floors and equipment. Just as business got better FaBrizio suffered the loss of his father in 1979.In 1981, Simple Green became Sunshine Makers, Inc., and has branded that name since. Because of those humble beginnings, Simple Green is now available in 54 countries,worldwide and considered the lead in highest standards in alternative cleaning solutions. 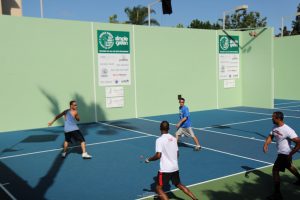 Naty and FaBrizio met at the Rose Bowl Handball event in 1984. The two quickly became friends and FaBrizio began to sponsor Alvarado’s sons in 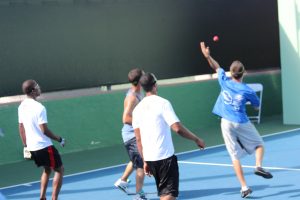 junior handball matches. Alvarado held Halloween type party events for the last 24 years and needed a place to sponsor then. There grew a need to have a place to accommodate all of the three disciplines of handball training and eventually the Fountain Valley Sports Village area became home to the Naty Alvarado Annual Handball Classic. Sunshine Makers, Inc. developed a Youth Handball program that extends a heartfelt welcome to women and youth. The program delivers thousands of handball giveaways to schools each year.

The three disciplines are four-wall indoor, of which Fabrizio and Alvarado are trained in, three-wall outdoor, which FaBrizio’s says that Californians are familiar with, played on school grounds and beaches. Three wall is is also played on the East coast however, FaBrizio says, what is big on the East is the third discipline, one wall, which is just a flat wall and an open space. In fact, the event is so popular that there will be demonstrations held at the next Olympics in Brazil. The Fountain Valley facility is the only place in the country, presently, that houses all three disciplines. 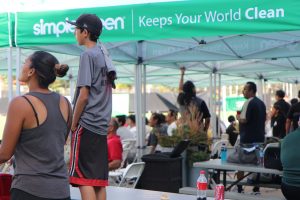 Hand ball a fast growing pastime for some and career for others, is now moving neck and neck with Rugby, although at this stage anyway, 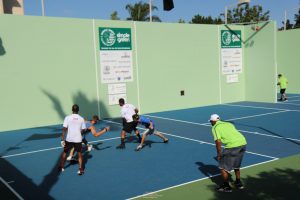 lagging behind major sports like Tennis. The one-wall discipline is played in over 120 countries making it accessible to the average person. There are 85, 86 year old handball players. A delicate cross between soccer and basketball, the sport has increased in popularity over the years. Players selected according to the ranking they derive from other competitions are able to join in the competitive sport with little or no risk. After being drafted into football at camp, Fabrizio said, the first thing we were taught was to learn how to co-ordinate, and go back and forth, between the left and right sides of the body. Handball teaches you how to be ambidextrous. “There is an equal balance that has to happen with the body, which handball teaches and what most find difficult to do. Handball is like watching someone play Chess at 120 miles per hour, states FaBrizio. According to the Simple Green founder, handball has become so popular that there will be demonstrations around the sport, at the next Olympics in Brazil. In addition, Brazil has taken the lead in assuring that handball continues to grow in popularity. Participants of all age groups and gender can sign up to play handball at an affordable fee. The professionals are just like any other pro sports player they compete all over the world. He is hopeful that more and more youth and women will come to love the sport just as much as he and Alvarado do.

The road to success has been a long and arduous one for Bruce FaBrizio. He continues to make head waves in the sports industry and seek out worthy competitors for handball competitions. At the end of our interview, we had the opportunity to take a photo of EGBAR the green mascot for the EGBAR Foundation formed in 1989 by Bruce. The letters spell out Everything’s Gonna Be All Right. A portion of sales from Simple Green, help to fund the foundation which has an incubated national education youth curriculum focused on teaching environmental responsibility. EDGAR most recently formed a partnership with The Sea Lab and The Catalina Island Conservancy, giving the foundation great support in aiding Simple Green to uplift and inspire youth to care not only about the world but their own communities, as well.

Sunshine Makers Inc, is located in Huntington Beach, California with offices over the world. Simple Green is manufactured in Garden Grove, California, Rydalmere, Australia , Lawrenceville, Georgia and Bernburg, Germany.  Other distribution centers can be found in, Maastricht, Netherlands and Choisy le Roi, France. Sunshine Maker, Inc., manufacturers’ offices are placed with intent in various areas of the Unites States.

Bruce FaBrizio and wife Viviana live in Corona Del Mar with their family of five dogs.