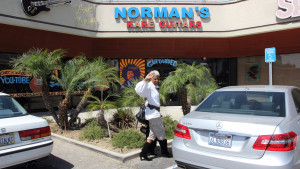 When I think of bass, I think of the made to sing, homegrown voices of Luther Vandross, Billy Eckstine and ultra song-tress, Sarah Vaughn. When I think of the sound of the bass, the rhythm and mood of the bass, the get your fanny moving, grooving, bass, I think of two -time Grammy winner, author of “The Bass in You,” guitarist, Jerry Jemmott.
If I had to describe Jerry in one solid color, it would be Red. The color is associated with passion, also known as the , flip side of anger, energy sequestered within a never give up spirit, courageous and un-fearing, action oriented, and strong in intent. This would not define even a slither of who the man really is, but geez how can it, in just one setting. I called Normans Rare Guitars another subculture within itself, who was kind enough to let Jerry and I come out and rap a few ticks in their casual, yet historical setting.
Just so you know and for a little bit of rock, blues and err-thang in between story, Normans Rare Guitars has been in the game and yes still on the table, in a world spinning since 1975. Norm Harris the Normans of Normans Rare Guitars, is a musician himself and collector of vintage guitars. Norm’s first venture, going out to find a bass for Bobby Caldwell and his friend, a fellow musician could not have been easy but the hunt for a rarity, taught Norm how to play. A series of events ranging from the purchase of an old Fender jazz bass for iconic band player Frank Williams of the “Rocketeers”, whose featured guest was, “Little Beaver”. As word got round that Norm was the man for finding rare vintage and sometimes downright impossible guitars, sales increased, the store changed location and the rest is is a made for television story. When electric bassologist, Jaco Pastorius signed off on the, it’s all good list”, Harris’ obsession for vintage guitars had become a lucrative one.

It’s been an amazing journey from then to now, for Normans Rare Guitars, The store draws legends both old and new, and those of whom just the saying of their name is infectious. We’re talking A-list folk, Eddie Van Halen, Les Paul, Bob Dylan, George Harrison, Robert Pattison, Hugh Laurie, not to mention the likes of T-Bone Burnett and the list just keeps growing, and growing, and gone.
Norman’s latest list of visitors heralded Joe Bonamasso, Joe Walsh, and now Jerry Jemmott. Just goes to show that things are forever moving forward at this iconic spot. All on the same day, live and in living color, we had a chance to get Jordan, the son of the infamous Norman Harris, to hang out with us on camera. Right there In the secure arms of their local long stay, where Jordan learned the art of buying and selling rarities, he gave his very modest take on his father’s store, its lega 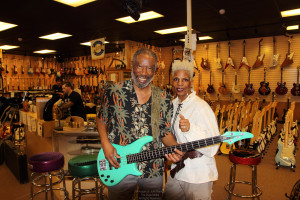 cy and his OJT ( on the job training)experiences.
This leads me back to color, sound and Jerry’s, “The Bass in You”. Hanging out in a dancers environment had to have given Jerry the necessary flexibility to make the big jump to playing the Horace Silver influenced playing of the, electric guitar. His brilliance lends itself stretched somewhere along the aisles of the insane. You know the ones that show light, and promise, yet do not fit the established quota.
Jemmott makes it known first off, that he holds back no punches when it comes to the living experience of color and sound, and the theory of color and sound. In experience, there is the required action, to become one with self; the latter one only thinks of becoming.
As Jerry would say, “make it happen.” Well, in order to make the transition, an aspiring soon to be, an 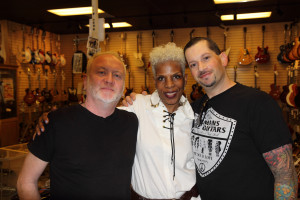 emergent, uses the guitar and its well strung knobs to express pain, joy, and to calm the endless rattling of the mind. It’s body to hold onto dreams, create and shape dreams, become lover, friend, family and foe. This man of depth and talent wrote the “The Bass in You” in order to give assistance to the budding essence of self, allowing it to clearly express, and to wear an unprecedented stamp which reads, “free of modification.”
The same freedom Jemmott brings to his repertoire gifted by, great fortune, that Jerry says, comes from his daily practice of Buddhism. Of course, the gracing of studio walls etched with the breath of royalty ala the, Chambers Brothers ain’t all that bad either. In addition, Jemmott received a daily menu of appetizers, complete with the laying of tracks for King Curtis, B.B. King, Wilson Pickett, Roberta Flack, and the “Queen of Soul ;” Aretha Franklin, who he frequently tours with. Other mentors and fellow bassist popped up along the way, Percy Heath, Ray Brown, Milt Hinton and Ahmed Abdul-Malik, made as a natural fit as the tipping of a bucket of wax, on an already slippery wooden floor.
Big bands followed accordingly with Jerry’s developing gift to hit that lick, slap that bass and brand a unique sound. The interaction, perfect fit and colorful display of rhythm, harmony and color threaded sound was revolutionary. It was the blues, it was jazz, it was R&B, it was the real shit, the bubbly gusto called music.
Time turned memories golden and has found a way to highlight a deeper aspect of Jemmott, the man whose followers call, ‘the funk master”. This well-defined wave of bringing correct balance to all things puts Jerry at the realm of actor. His active participation on the life of his dear friend, Jaco Pastorius, led him to a role in the documentary of Jaco. The documentary is set for viewing in September 2015. Meanwhile, screenings are being held nationwide and receiving incredible reviews.
Who can truthfully say what is yet to be discovered whilst filtering the deep emotional waters of Jerry Jemmott but what we can safely say is that whatever it is, it’s got to be funk.