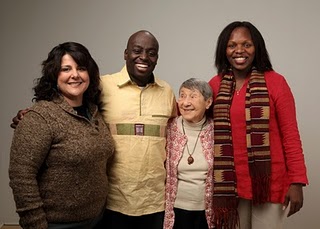 Jennifer was born in the lab of film independent then hand fed an opportunity by Sun Dance. The meal served was “A Small Act.” As I approached the door of Â the Media tent located on G2, I was greeted by the very warm smile of publicist, Kate Payne. The wait had been 15 minutes later for me and the last interview of the day for them. 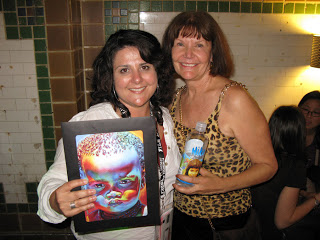 BLUE SCAN: Contact- “Hi Jennifer, its so nice to finally meet you.”

SCAN FAIL: friendly habitat. Entity- Director Jennifer Arnold- bleed factor next to none. “Wow, have I heard a lot about you and your film, “A Small Act.” This tiny lil girl/woman and now VIP looked like a GIANT as she sat in her Directors chair.”So how did you go from being Jennifer Arnold, to being JENNIFER ARNOLD, I asked.” Lol.. she replied, “yes, I’m documentary famous.”

I always wanted to film. Â I had a short that was in Sun Dance and they exposed it to HBO. The Directors lab that I did at film independentÂ wasn’t for ,”A Small Act”, it was for a narrative that I wrote on a teenage boy, motorcycle movie that I could never raise the money for.” “I think that daring being that you were a first time director and all.” IÂ spoke quickly trying not to interrupt. 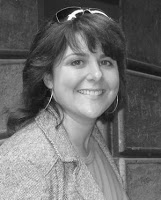 ” When I started on “A Small Act”, I was writing an entirely different script and procrastinating.” “I called my friend whom I met while attending the University of Nairobi for a year as an undergraduate.” So I already knew a few Kenyans. I believed in sponsorship and donation, so I told my friend that I wanted to sponsor a Kenyan kid.Â

I wanted to sponsor with an organization that I trusted and who I felt wouldn’t spend the money. So my friend started to tell me this story about how she and her cousin Chris were starting this fund. Chris was looking for his sponsor whom he had never met.Â  All he knew of was her donation of $15.00 per month that she had given since he was a child, to insure his getting an education. This kid, Chris grew up, went on to Harvard and became a lawyer.

He is an Attorney that fights against genocide. Hilde didn’t know that this would happen. So I thought, this would make an amazing movie, because although you hear about these lawyers, doctors and people there no one ever makes a movie about it.”Â Â  Did I tell you what happened when at our first Sun Dance screening.” Well, no, please do tell me.” “Chris was at the screening, so soon after people saw the movie they started going up to him and handing him checks and cash.Â

By the time the ten days were over at Sun Dance, he had received 90,000 in donations.”Â  Whoa!! so it impacted the audience as well, yes?” I asked, shaking my head up and down.Â Â  www.asmallact.com.
“When did you decide that you wanted to do film.”
“In the fourth and fifth grade I would rally the kids in the neighborhood to do plays I never wanted to be in them but I wanted to direct them. I was good at giving direction and telling everyone where they should be placed on the set.”

“Looking inquisitive, I asked, so after that experience you decided to shoot?
“Yes, we had a little money but no real big budget or anything.”
“I was the director, the producer and the sound person. lol again, wearing all those hats, I said.”
“I had made shorts before but this was my first feature film. Our cinematographer Patty was also a producer. Then we got this assistant who was this super sweet guy who would do everything we asked of him and we had a second guy also Kenyan and that was how our story got started.”
I seemed to have traveled to Kenya, just hearing her talk about the process.
“How would you encourage women to be confident in believing what you did can be done by anyone, even a woman?”
“Absolutely, anyone can do this if they really want to.”

I noticed that her eyes lit up when talkingÂ  about her love of film and story.

“I had no idea or would ever have imagined that this would be my life.”

“I have gone into meetings and because I was a woman those people said wow! we don’t have any wedding stories.Â  So in some ways I feel that it’s somewhat harder for women.”

“I believe that everyone is prejudice to a certain degree and as a woman, I have experienced some of that.”

“You have carved out a niche for yourself and with so many films coming out ofÂ  Africa do you see the industry shifting more towards independent film than feature?” I couldn’t wait to hear her answer.

“I see a split because there are those people who want to make movies who will make them no matter what.”

“Like it’s hard to make narratives with two people, it just is.”

If you get good documentary stories, I feel that if there is a narrative there, drama then, ok it’s a documentary, it’s a film and a film is a film, so I think that are going to be a lot more people making documentaries because its slightly more affordable. You can buy a camera now that’s a really good camera. or 3000. I think the studios are taking less risk and are more likely to make a 100 million dollar film than a 20 million dollar film .There are people like myself who aren’t going to wait around for the studios to give us a chance. So we do the story that we can afford to do and one we’ll be good at.Â  www.cherryskyfilms.com.

“What is your next challenge?” this one would be a piece of cake.

“I’m researching two documentary feature ideas, I also have this woman who has a comedy script, I have another story that I want to write. I think to survive today as a film maker these days you have to juggle and figure out where to get the money from.Â  You just can’t do one thing and expect things to click.Â  I love narratives, I love documentary”

“My next project will probably reveal itself to me.”

The way I see it, for this one, being good was not some where far away.