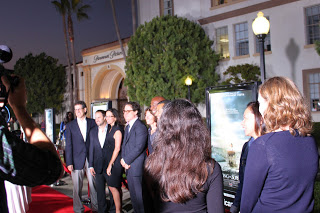 A phenomena occurred on the lot of Paramount Studios when a team of brilliant minds, that mos definitely think alike,Â walked the Red Carpet to see their LA screening ofÂ  “Waiting For Superman”.Â Â  A documentary whose goal is to inspireÂ an insightful and much needed examinationÂ of the critical state of the US educational system.

Upon meeting Director, Davis Guggenheim, Lesley Chilcott (Producer) and Geoffrey Canada ( President and CEO of Harlem’s Children Zone or HCZ ), there was a feeling of joy that this storyÂ was being told and a sadnessÂ in knowingÂ the fact that it had to be told.Â  Davis looked vigorous and was well read in telling his story as if it were in 3D and through stellar vision.Â He mentioned the need to remind parents, teachers and all interested others to jump in and get involved in our plight to turn this crisis around.Â http://www.waitingforsuperman.com/. 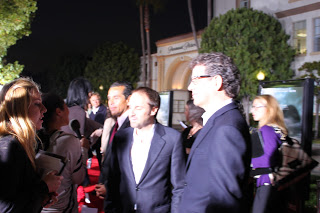 The City of Angel’s Mayor Villaraigosa was on hand to lend his support. He had this to say, ” people if you watch this movie and you don’t cry and or feel anger; at the end of the movie, if you’re not moved to actÂ and see that we can change our kid’s needs and transform our schools then, you don’t have blood in your heartÂ or pumping through your veins”, you just don’t.

And this is a powerfulÂ enditement on public education. You know there are a lot of great teachers and I am a big supporter of teachers but there are a lot of excuses from those bureaucratsÂ who defend the status quo, it’s not working for our kid’s and frankly, thats gotta change.”

Geoffrey’s conversation focused on the watching ofÂ Superman.Â Â By watching this film the public couldÂ help shed light upon this crisis and the need for everyone to be involved.Â Â When asked the question, what if parents won’t help to fight or are incapable of helping to fight the battle of illiteracy,? direct quote, ” we have to continue to help these children whether their parents are involved or not”.

Canada a Harvard graduate andÂ writer has penned poems such as “A Small Army of Love” and “Take A Stand”. He has spent 20 years building HCZÂ  http://www.hcz.org/ and has appeared on the “Oprah Show”, “The Today Show”, “Good Morning America” as well as in articles in the “New York Times”, “The New York Daily News” and “Newsday”.Â  Facebook’s Zuckenburg donated 100 million to create a charitable foundation, Startup:Education.

Producer, Lesley Chelcott spoke about the great necessity to support and on the wonders of research regarding education and its place in the so called new world order.Â The color green seemed to be a favorite of hers as it shades her interest in environmental programs that support all things naturale. I asked her how had women in particular responded to the movie, Lesley said, “well the good news is, we’ve been received incredibly well and in addition teachers saying,what can I do to help perform within my own system.

I had a number of parents come up to me and ask this question there was this one parent in Houston Texas who came up to me and who had gotten involved in KIP and ended up working there and she said, “I didn’t know that I had the right to want my five year old to go to Harvard. Now that I know that, everything is different.”. Then she said, “they have lots of programs that save kids, KIP saves parents”. Â “KIP taught me how to advocate what I need to know”. Â Chelcott said, so in many cases it is the mothers and women who advocate most.”

Waiting for ‘Superman’ opens in limited theatres in (NY/LA) on 9/24 and expands nationwide in October.