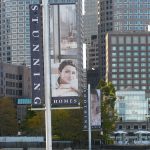 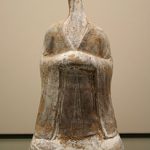 Pink is a favorite singer and Â one of our staff’s favorite colors here at Ankh Entertainment and Stones In The Color Of Rare.Â  Usually there is an array of nail polish reflecting shades of pink, pink lipstick, pink shirts, pink shakes, pink hair, pink ties and even pink snakes.Â  Singapore went all out this year and presented a bold rose pink snake for their interpretation ofÂ  Chinese New Year.Â Â  The Year Of The Snake according to “webipedia,” we mean, wikipedia is as follows:

The Snake (è›‡) is one of the 12-year cycle of animals which appear in the Chinese zodiac and related to the Chinese calendar, as well as in related East Asian zodiacal or calendrical systems. The Year of the Snake is associated with the earthly branch symbol å·³.Â Â Â Â Â  [1][youtuber youtube=’http://www.youtube.com/watch?v=psPXYfxb2XA’]

According to one mythical legend, there is a reason for the order of the 12 animals in the 12 year cycle. The story goes that a race was held to cross a great river, and the order of the animals in the cycle was based upon their order in finishing the race. In this story, the snake compensated for not being the best swimmer by hitching a hidden ride on the horses hoof, and when the horse was just about to cross the finish line, jumping out, scaring the horse, and thus edging it out for sixth place.

The same 12 animals are also used to symbolize the cycle of hours in the day, each being associated with a two-hour time period. The “hour” of the snake is 9:00 to 11:00 a.m., the time when the sun warms up the earth, and snakes are said to slither out of their holes. 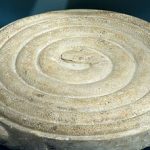 In Chinese symbology, snakes are regarded as intelligent, but with a tendency to be somewhat unscrupulous.[2

Red packets for sale in a market in Taipei, Taiwan, before the Year of the Rat 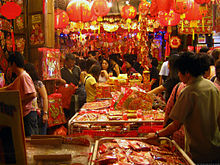 Shoppers at a New Year market in Chinatown, Singapore

The first Chinatown, centered around Alameda and Macy Streets, was established in 1880. Residents were evicted to make room for Union Station, causing the formation of the ‘New Chinatown.”[3][4]

In 1871, 19 Chinese men and boys were killed by a mob of 500 locals in one of the most serious incidents of racial violence that has ever occurred in America’s West. This incident became known as “Massacre of 1871“.

Reaching its heyday from 1890 to 1910, Chinatown grew to approximately 15 streets and alleys containing 200 buildings. It was large enough to boast a Chinese Opera theatre, three temples, its own newspaper, and a telephone exchange. But laws prohibiting most Chinese from citizenship and property ownership, and Exclusion Acts curtailing immigration, inhibited future growth for the district.[5]

From the early 1910s Chinatown began to decline. Symptoms of a corrupt Los Angeles discolored the public’s view of Chinatown; gambling houses, opium dens, and a fierce tong warfare severely reduced business in the area. As tenants and lessees rather than outright owners, the residents of Old Chinatown were threatened with impending redevelopment and as a result the owners neglected upkeep on their buildings.[3] Eventually, the entire area was sold and resold, as entrepreneurs and town developers fought over usage of the area. After 30 years of continual decay, a Supreme Court ruling approved condemnation of the entire area to allow for the construction of the new major rail terminal, Union Station.[3][6]

Red packets are also known as å£“æ­²éŒ¢/åŽ‹å²é’± (yÃ suÃ¬qiÃ¡n, which was evolved from å£“ç¥ŸéŒ¢/åŽ‹ç¥Ÿé’±, literally, the money used to suppress or put down the evil spirit) during this period.[27]

Red packets almost always contain money, usually varying from a couple of dollars to several hundred. Per custom, the amount of money in the red packets should be of even numbers, as odd numbers are associated with cash given during funerals (å¸›é‡‘: bÃ¡ijÄ«n). The number 8 is considered lucky (for its homophone for “wealth”), and $8 is commonly found in the red envelopes in the US. The number six (å…­, liÃ¹) is also very lucky as it sounds like ‘smooth’ (æµ, liÃº), in the sense of having a smooth year. Sometimes chocolate coins are found in the red packets.

Odd and even numbers are determined by the first digit, rather than the last. Thirty and fifty, for example, are odd numbers, and are thus appropriate as funeral cash gifts. However, it is common and quite acceptable to have cash gifts in a red packet using a single bank note â€“ with ten or fifty yuan bills used frequently. It is customary for the bills to be brand new printed money. Everything regarding the New Year has to be new in order to have good luck and fortune.

The act of requesting for red packets is normally called (Mandarin): è®¨ç´…åŒ… tÇŽo-hÃ³ngbÄo, è¦åˆ©æ˜¯. (Cantonese): é€—åˆ©æ˜¯. A married person would not turn down such a request as it would mean that he or she would be “out of luck” in the new year. Red packets are generally given by established married couples to the younger non-married children of the family. It is custom and polite for children to wish elders a happy new year and a year of happiness, health and good fortune before accepting the red envelope. Red envelopes are then kept under the pillow and slept on for seven days after Chinese New Year before opening because it symbolizes good luck and fortune when you sleep on the red envelopes for seven nights.Â Â  C

Chinese New Year celebrations are just a few of the many cultural events that the City of Los Angeles and the State Of California offer for tourist and the states residents alike.

This has been another Stones In The Color Of Rare Productions.

I know that you’re out there, now let me feel you glisten.