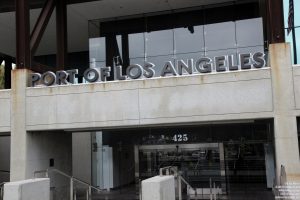 If you’ve never been to San Pedro, California, understandable, however if, you’ve never been to San Pedro’s NASA Port of Los Angeles, now that’s another story. Still half-asleep, the breeze streamed over my face around 8:00 in the morning, as I walked through the doors of the Port of Los Angeles, at 425 South Palos Verdes in San Pedro, California 90019. I felt proud, almost accomplished until security said, “we know nothing about the event, who is your contact person, what is it called, again? I said, “Navy Days,” oh, he said, it’s being held at the USS Anchorage, which is about a ½ mile from here, its walking distance. There was no yellow brick road and walking out of the door, I suddenly felt akin to the scarecrow. Sir, I’m not from the area, I said” which part of the Port is the Anchorage posted? I looked outside and really had never been to San Pedro except once to cover an event, a very long time ago.  “Navy Days,” opened to the public on August 9-10, Saturday and Sunday, from 9:00AM-3:00PM. Reservations are made in advance. The U.S.S Anchorage is the seventh San Antonio-class amphibious transport dock ship, commissioned in her namesake on May 4, in 2013 in Anchorage and launched on May 4, 2014. The ship carries four CH-46 Sea Knight Helicopters, and two MV-22 tilt rotor aircraft. The ship’s homeport is in San Diego. ` 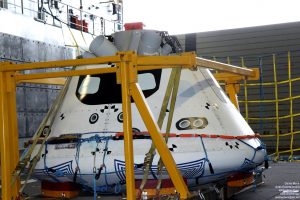 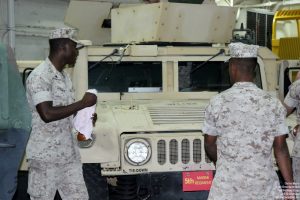 As I walked out of the door, headed for I knew not where, I happen to run into an Arrowhead truck who, seemed just as lost as I was. The manager, Josh said,” where are you going,” I said, trying to find which street leads to the Anchorage. Josh said, oh we are vendors for the event and going your way, so, I will walk with you. When we arrived, we had to of course, be secured, however looming out above our heads, were the helms of the U.S.S Anchorage and the U.S.S Iowa, which is the ship that Arrowhead needed to find. We parted ways and I headed up the ship’s long metal ramp. A few days earlier, I had put in a call to Guy Webster, at NASA’s JPL base in South Pasadena, just to make sure that I did not miss anyone that would be 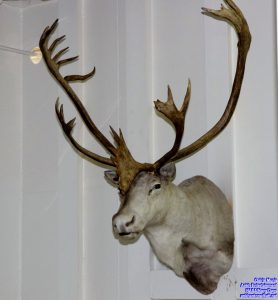 attending. It was nice to know that JPL is playing a big part in supporting NASA in the future plans for the development of programs such as this one. We were to see the craft, “Orion” and take a sneak peak at the latest deep space exploration plans set up by NASA. The plans include sending Astronauts to an asteroid on Mars. Being a huge sci-fi fan, I braced myself for a Sandra Bullock, space resistant suit, used in the Oscar nominated movie, “Gravity.” We were greeted by a wholesome staff of physically fit, men and women, all busily working in their fashion conscious uniforms. 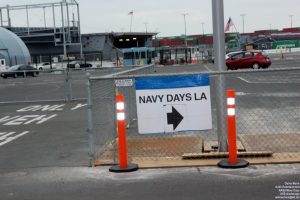 The Orion sat there right in front, in the well, looking almost like a Google Play store item. It was the biggest test spacecraft, I had ever seen. Both the Navy and NASA are involved in the setting up the spacecraft test practice, in order to demonstrate how the craft is to be, recovered from the Ocean upon landing. In December 2014, the plan is to take the craft up, on its very first trip, to explore deep space. This would prove to be an outstanding feat for the mission; accommodating humans and traveling further than any other, for the first time in 40 years, while hovering 3,600 miles above earth. When Orion returns, it will be moving close to 20,000 miles per hour, splash down into the Pacific, be picked up by the Navy, and return to shore. 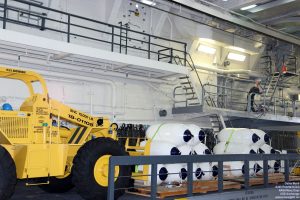 The recovery test took place from August 1-4 off the coast of San Diego, with the latest version of Orion transferred to “Navy Days”, at the Los Angeles Port. 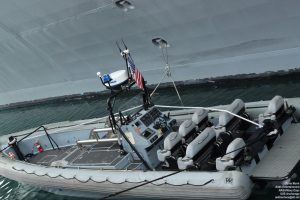 I had the opportunity to speak with a team of experts, from both Navy and NASA personnel, like Orion program manager, Mark Geyer, Grounds System Development, and Operations manager, Mike Bolger, astronaut, Nicole Stott and CNDCM Pete Santos, USN Command Master Chief and Lieutenant Michelle Gano, the ships doctor. The Orion sat down in the well. I was told that the well is set up for anything that a crane or forklift cannot accommodate and usually registers 6-10 feet deep. It is an exposed deck aka weather deck lower than fore and alt decks. The well, filled with solid bulwarks that, impede the drainage of water over the sides. The well, also referenced as an exposed recess in the weather deck that extends ½ more of the length of the vessel over the weather “deck.” Commander Santos, directed one of the on-deck personnel “Boates,” as he is affectionately known to his sea-mates to give me a personal tour. He made it all look so easy. In a steep climb both up and down, the ship seemed to come alive, as groups of U.S military personnel, scurried around, on multiple decks. Some of them had not seen their families for a very long time. While discovering the lay out of the ship, we visited the room with the “Moose.” 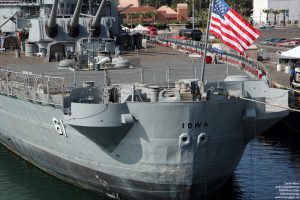 The Moose was everywhere. The other note of interest was that there were great quotes of inspiration posted by some of our most influential and beloved philosophers like Napoleon Hill and W. Clement Stone. After a very arduous workout, and upon leaving the inner sanctuary of the Anchorage, I felt ethereal, as if touched by something much deeper than my own personal thoughts and enlightened way beyond my comprehension. For more information on “Navy Days” and for some cool animation of the newest Mars rover, the following links are provided by, Guy Webster of JPL. 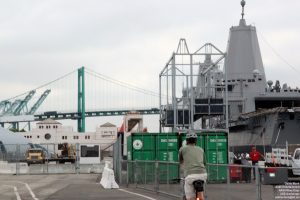 « LA River Paddle Inspires Hope, Caring and Teaches the Art of Conservation to At–Risk Youth
Good Vibrations is More Than a Notion, It’s a Way of Life »