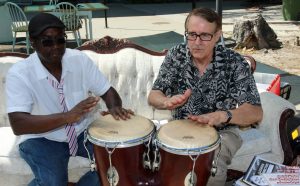 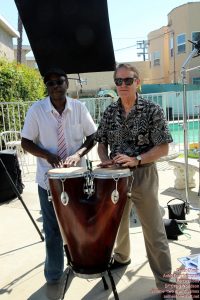 stated and without revocation, that we are all indeed from the same earth of Africa. A man of gentle nature, Craig, is a global explorer and has a natural flair for gathering ancient teachings that take notice of all strains of music and sound , and even more-so on , percussions. He is the founder of “Roots of Rhythm,” a Cleveland based organization. He works closely with the NAMM Foundation. He presented his Roots of Rhythm program to “Remo Recreational Music Center ,”of North Hollywood, while visiting Los Angeles. Jimmie James on the other hand, is a local resident a musician .who says, that after having a dream, he came up with the design of the world’s first, two-headed drum, made with only one piece of wood. His earlier inventions starting at age 10, included, a subwoofer made out of an old conga drum with a speaker inside. James being unaware of his creation plugged the speaker into a speaker system.  It was so loud, that he had to leave the room. Those early beginnings of successes and sometimes failures did not stop Jimmie from pursuing other types of inventions, finally bringing him to the patent, and packaging of the planet’s first two-headed drum. No one believed that Jimmie could come up with a design. When the drum appeared, in his dream, Jimmie knew that the sound would be exactly, the same when the drum’s concept came to life. This happened in 2008. After keeping his concept to himself for a year, Jimmie hit the ground running with his two-headed drum, approaching “Remo Recreational Music Center,” and at that time, a record store called, Motherlands Music. The other companies did not believe that James had created a drum with two-heads however; Dan Rice at Motherlands not only gave his support, sent the new product to Ghana on Jimmie’s behalf. Ghana was able to turn the drum’s design around for Jimmies’ approval, in just a months’ time. Now that all of the patents are in place for Jimmie’s two-headed drum, he is just waiting to hear back from sponsors like industry icon, Dionne Warwick, who is writing a letter of endorsement for the drum. More recently, James’ invention met with approval from President Obama. The history of the drum goes as far back as slavery and beyond. Dr.Woodson, studied African drums in the 60’s, and whenever they would break, he would fix them. After that, Craig got into making prototypes of new designs and landed in North Africa. On the way back from North Africa, during the 70’s, Dr. Woodson, saw fiberglass and plastic drumheads from Africa, and so decided that if the Africans could do it, then so could he. After getting into higher technology, he got an invite to go to Ghana and work at, The University of Science and Technology, which was the center for cultural studies, for three years. He directed the Music and Instrument Technology workshop, there a program lasting 30 years later. The workshop included making 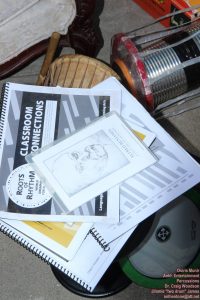 all types of instruments, including percussion. He and his staff would go out and rescue instruments like the Seperewa, a class of harp-lute chordophones and string instruments that were dying from under use. Since Woodson’s research these musical treasures have made a resurgence.. 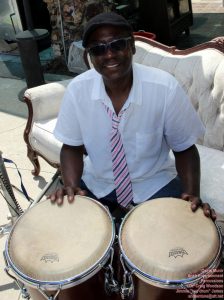 That experience was the beginning of a lifelong love affair between Woodson and Africa and his showing young people how to make their own musical homemade tools for sound. Woodson began a demonstration of various talking drums such as the “Dondo”, it makes the sound, don-do. This drum has a change in pitch when squeezing it.  Woodson wanted to make a simpler version of the “Dondo” and so came up with the technology of, using two large metal cans, the same ones that you can find from a pizza store, embroidery hoops, and packing tape.” Kids in Africa will take rubber from a tree, and wrap it around a can and make a drum,” he said. I made comment about the simplicity of just how easy it is to do. The tape, called, cheap tape is the cheapest tape that you can buy because it stretches. Also important to note, is, that the drumhead can be firmly secured, with, the packaging tape by using a crisscross pattern. In the process of Dr. Craig Woodson’s teaching children to make their own music, a series of instructional manuals came to be and the doctor after an invite, wrote, “Roots of Rhythm World Drumming for All Ages. “ Chapters  1-10The series of manuals can be found online, free of charge.at www.rootsofrythm.net.  The books were created,  for, the Percussion Marketing Council and the NAMM Foundation, which have been underwriting the doctor’s instructional manuals for ten years. Craig has taken the series of instructions on the making of percussions, nationally, to teacher workshops, making it easier to teach all who want to learn. He calls upon experts of various cultures to approve the manuals. Kevin Locke who is a famous hoop dancer read the Native American drum and made the necessary changes, and although the manual are for teachers, anyone can use it. Craig gave a quick demonstration of the Tonbak of Iran, which dates back 2000 years. The Tonbak, is usually used for poetry and classical music and is played diagonally across the torso and the player uses the fingers and palm of the hand. The different sounds or rhythms, 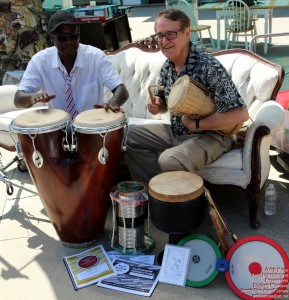 as a “Kurdish,” of Iraq and an Arabic rhythm is simply a high tone in the middle,” said Dr. Woodson. Gideon means “the person who is crying.” Its count is in 14 beats. The United States outlawed all drums including peace pipes used by Native Americans. An African message can be transmitted at the speed of 100 miles within an hour. According to Jimmie, if caught smoking a peace pipe or playing a drum, one could go to jail. Craig’s ancestors came to the country in 1619 and in 1620 the family brought six of the first 20 Africans that arrived in the US. In 1998 the descendants of all Woodson’s both white and black met on Craig’s behalf, in order to give a public apology for their part in slavery. The 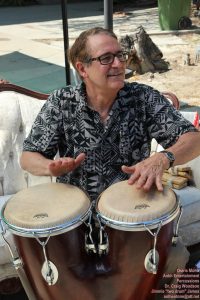 Ashanti people, of whom, Dr. Woodson had worked with in Africa were invited, as to they were the slave contributors from Ghana. The meeting and public apology offered by both sides of the Woodson family set the stage for the healing that has to happen, in order for us all to truly be free. For more information on Dr. Craig Woodson Drums of Humanity and the Roots of Rhythm program, search www.rootsofrhythm.net  woodsonphd@gmail.com, www.EthnomusicInc.com, www.RootsofRhythm.net and www.DrumsofHumanity.org.  For Jimmie James and his two-headed drum  contact twodrumsjimmie@yahoo.com or call 323-939-2658.

« Two Little Birdies Sitting in A Tree K.I.S.S.I.N.G Lip Paintress Natalie Irish Puckers Up for ART
FICG in LA Strut their Stuff on the Red Carpet with Vision and Vibrancy for Film Fest Gala »