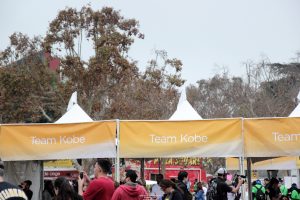 This past Saturday, sports and exercise lovers from corporate sponsors to community came out in sneakers and team wear in support of Kobe 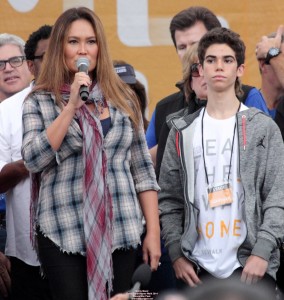 Bryant’s Home Walk 2014. The 8th annual event held at Exposition Park in downtown Los Angeles, and hosted by United Way of Greater Los Angeles, drew more than 13,300 walkers, and piled up almost $1.29 million and some change in donations. Last, we heard the donations were still generating. The 5Krun and walk set up to find innovative ways to help to end homelessness, welcomed 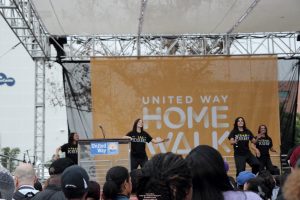 Julian Castro, US Secretary of Housing and Urban Development, Elise Buik, President and CEO of United Way Greater Los Angeles, Cameron Boyce , star of Disney Channel’s, “Jesse”, who has benefited from Home Walk and Grammy award winning singer and actor, Tia Carrere, and the Conrad N. Hilton Foundation. All spoke progressively and with resolute determination to stand together in support of the Bryant’s, top local sponsors, public officials, and residents of Los Angeles in waging war against this severe and life threatening condition. Individual kudos for mastering fundraising at the tune of $20,000 went out to Chris Carey of City National Bank.

Localized teams moved as if with one mind wearing different colors to help brighten up, what started out as low clouds and a no rain in sight, kind of day. Amassing a historical funding of 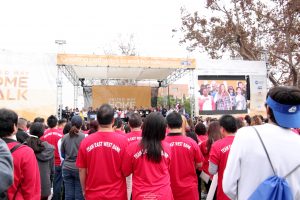 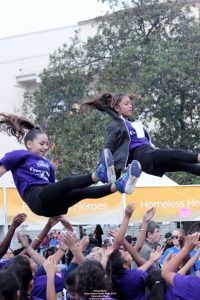 Indie rock band, Terraplane Sun, entertained and did a great job at keeping everybody warmed up and dancing along to Pharrell’s, “Happy”.

Perhaps the Southern California warm weather could be a factor that Los Angeles holds the title for the largest population of homeless veterans (4,618) than an 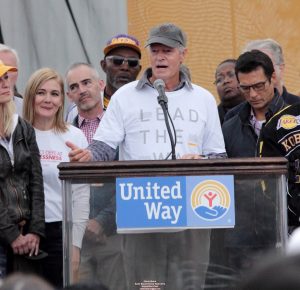 y other city in the States. The higher percentages of that number being 30% chronic substance abusers, 1 out of 5 being women and children who are homeless, and 28% with severe mental illness. Although the Home Walk program has made remarkable headway, without continued support and staunch action, fulfillment of a call to action, could very well take years.

The numbers are staggering, 40,000 (39,461) in LA that is one out of 250 are homeless men and women. In addition, 10,000 have chronic homelessness; which should be an embarrassment to a county that has enough land to seat several small countries, and a host of wealthy real estate agents, to fill unwanted government vacancies. Led in part by United Way, participants are encouraged to donate time, offer funding, and campaign to put the homeless into permanent housing.

Buik maintains ceaseless courage in using her talent to help to develop platforms for public officials and business owners to merge their support for this huge undertaking. With a tight creative plan and a new Mayor who appears to have a sense of vision for a County that brims with able-bodied residents, it should not be as difficult a task as much as it is time consuming. An unexpected highlight was the National Anthem as interpreted by actor, vocalist, and Home Walk 2014 movement motivator, Tia Carrere, who has personal insight into the situation as she lost a friend and acting coach to homelessness. Tia should seriously consider pursuing a singing career full time, because she worked the anthem. After adding a wave of vocal respect in the lyrics here and there, the crowd was pumped and ready to walk or run, with feet in mid-air. 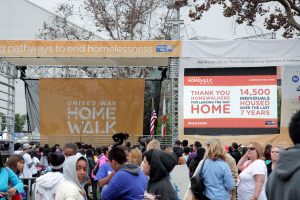 The runners and walkers became excited when Secretary Castro took to the mic and upon observation, there seemed to be a sea of early risers who 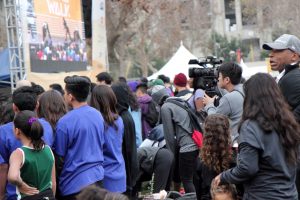 showed power in numbers. Over 50,000 mobilized participants have developed during the past seven years of Home Walk standing side by side, in their fight to end this devastating and often deadly condition.

To date Home Walk has raised $4million and effectively, permanently housed over 14,000 who once lived amongst the homeless population. 2014 has seen record-breaking housing placements of nearly 7000 chronic veteran individuals who with permanent housing and ongoing support, have a 85% chance of staying permanently off the streets.

Although Kobe Bryant was unable to attend the event, he and his family have matched funds raised by loyal followers of his cause, since the inception of the Home Walk program.

The chance that many can be saved from homelessness, with the combined efforts of local officials, Hollywood celebrities, athletes and the dedicated walkers and runners working together becomes more than a dream, it becomes a reality, and that’s how we do it, at HOME WALK.

For more information, on United Way and Home Walk visit www.unitedwayla.org  and  www.homewalkla.org.