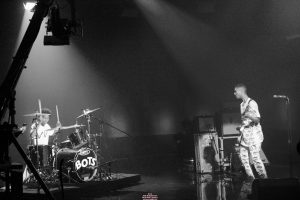 All that I can say is damn, these boys are good. They are even better than good, they are phenomenal having been playing together since the age of twelve and nine and ta put the icing on the 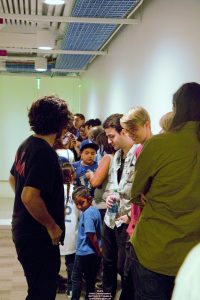 cake they are brothers. Holding tight to beats as they hit the skin of the drum is, drummer and vocalist, 17, year old Anaiah Lei and 21, year old lead vocalist, guitar and cold blooded bass man, Mikaiah Lei, are respectively known as, “THE BOTS”. Can you imagine, living in London, then back to home in Glendale, then off to Coachella, that’s all in a day’s work for these two. Mikaiah and Anaiah are longtime fans of “The Black Keys and The White Stripes,  with an obvious Hendrix influence.  With both young 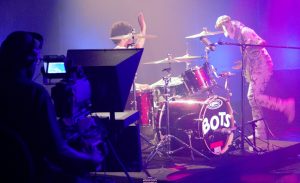 rockers being so talented, there was no need to look any further than your own family tree. Blues, Garage and Punk Rock influenced, “The BOTS,” to date have released three self-titled albums. Glendale, California, is land marked for success, as just having these two in the area should begin to turn a huge profit. There active and assertive schedule include, Two Vans Warped Tour, two afro-punk festival , Yeah, Yeah, Yeah support tours, Blur, Refused, Bad Brains and Damon Albarn’s,  Africa Express. Rolling Stone, NPR, and a feature in Los Angeles Time, its no wonder that the media agree on one thing, “The BOTS”, are an integral part of rock, punk and funk.  Europe always with an open ear, has embraced American talent who showed uniqueness and a willingness to spend time in their country. 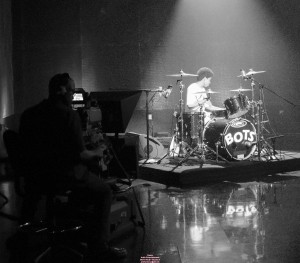 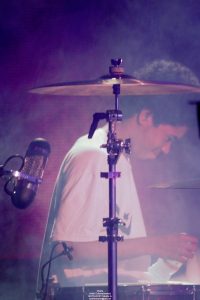 Interesting observation is that in the behavior of these two budding, and in some cases, already budded artists, is that the two are already ahead of themselves, tromping their own genius and moving to their own beat. With heavy rock and blues influences like artists Hendrix and Clapton, is why a crowd of 30 + lined up at Artbound ‘s KCET-Studio A to hear, “The Bots”, bot it up.  Hell, even I had a difficult time getting in and I’m a member of the press. According to word out, “The Bots”, live in Glendale, California and that’s the same place that Captain Beefheart resided. 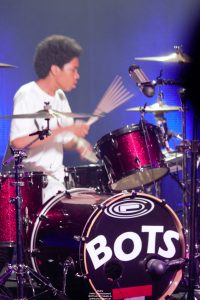 Despite the influences of the aforementioned, 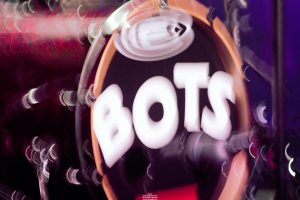 “The Bots”, do have their own sound. They rock to blues but add their own rifts and Mikaiah delivers with the soulful kick up of legendary, guitarist and vocalist,  Chuck Berry. He opens his mouth and brings tender love, care, and concern for the music to the mic. With the finesse of Hendrix his delivery is both romantic and sexual. This particular aura is not intentional the young man, although on the threshold of manhood, is still in development, but that doesn’t discount the fact that it’s there. Lil Brother, drummer and vocalist. Anaiah Lei, is no stranger to passion spring forth from youth either. The late Billy Higgins one of the most famous drummers in the world would have had to clap and loudly, leading up to Anaiah’s solo performance. The focus required to hit the drum, while in a confined area of an in house studio to boot, an outdoor venue would have been more appropriate. However given the situation, Studio-A , set the stage for Anaiah to bust the sticks, and I mean he brought em down hard.  Even with few redos, his drumming was as smooth as silk, making my left leg and the right hand I held Canon uncontrollably move back and forth. 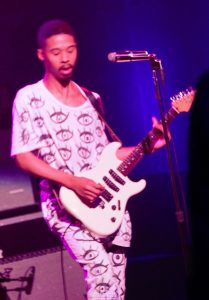 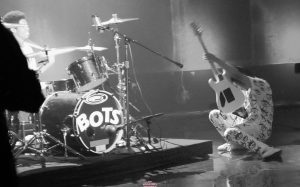 The entire crowd hyped up and Studio-A filled up with sound, essence, presence and the saliva left from the sweat that only rock can pull up out of a brown bag. The repertoire of selected songs went back to some of, The Bots earlier stuff and then began to move forward to now. Tunes like, “I Like Your Style” an early 80s and 90s Nirvana flavored Northern Lights, and let us not forget their thought induced  ballad, “On Old Days, “, sounded artfully sweet.  Their new October 2014 released, “Pink Palms” is their die hard, can you feel me now, full length LA, based recording.  “Pink Palms”, produced by Justin Warfield ( Yeah, Yeah, Yeah and Nick Zanner) Garage Punk, American Blues, mixed by Michael Patterson ( Nine Inch Nails, Notorius B.I.G. ) and mastered by Emily Lazar, (Foo Fighters, Arcade Fire) is a much bigger jump from their 2013 Fader label  (4) song release, “Sincerely Sorry”. In the case of, “Pink Palms,” a deeper garage and punk influenced beat lends one to believe that these young men are now stepping into some very recognizable shoes. 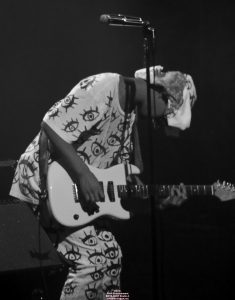 Rolling Stones: The Bots, “most likely to succeed”

NY Times: “The Bots are on the cusp of stardom.”

Hold up, wait a minute, I’m clapping to the sounds of The Bots, and my palms are turning pink.

For more information on “The Bots, “visit www.thebotsband.com and KCET’s Artbound Presents Studio A,  www.KCET.org/studioa.