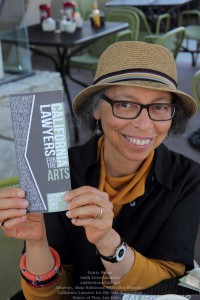 Regarding the quick approaching Black History Month, I wanted to focus on the persons behind the scenes, who are called to arms to be of untirin

g service. Such is the case of Attorney, Alma Robinson who started out as a California Lawyers for the Arts intern in the 70’s. Alma holds a dual role as CLA’s executive director, and as its legal representative. One might imagine as a female child growing up, and more so a female of color, that her desire might have been to become a doctor, a nurse or even President of the United States. In this child’s case, San Francisco based California Lawyers of the Arts Association’s, Alma Robinson, grew up, to become an Attorney. A graduate of Middlebury College and Stanford Law School, Attorney Robinson, has lectured at both Stanford and San Francisco State Universities. Her broad knowledge of State budgets and the politics of art, gives her the necessary background to oversee CLA’s flagship legal referral and education advocacy, as well as their alternative dispute resolution programs. Robinson is no stranger to heavy workload and distinctively stands at the forefront of Arts organizations, groundbreaking initiatives. CLA’s, Arts Resolution Services, is a cleverly styled inter-state mediation program. Robinson’s arts program became an immediate need for adults and youth who have skills and training; but are lacking proper work environments to make use and offer pay for these skills; is groundbreaking. Her new baby, the Arts and Environmental Initiatives, was  setup to discover and initiate channels for the Arts to raise the awareness and profile issues on Global warming; and lastly, the Arts-in-Corrections Project, made use of Robinson’s clear-cut and innovative ideas for change in how artist are perceived in the state correction system.  In particular, CLA’s Attorney, Alma Robinson’s Arts-in-Corrections Project, secured a historical collaborative partnership with other advocates achieving a State Corrections $2.5 million contract last year to set up assertive and engaging ways for prisoners who have artistic skills to continue to develop them. One would suppose that Alma’s former stint as a journalist for the Washington Star, doesn’t hurt either, as part of her CLA responsibility is to write California Lawyers for the Arts, blog.

Attorney Robinson, is a bit of an artist herself, her cable broadcast produced three symposiums on California Arts and Healthy Communities, which ran throughout California, and countries like Paris, France, and Havana, Cuba, who all echo her name, as she is the recognized and well-respected authority, of CLA’s educational programs there.

In Alma’s operational mode, she is privy to state budget reviews, thus her praise of State Governor, Jerry Brown, was admirable. As Robinson stated, “our former governor left the States’ budget pretty much in shambles. I can do nothing but say good about our Governor Jerry Brown, who has pulled our state out of financial crises and done a lot for the arts and its programs.”  The piece below is an excerpt on the life of the most famous African American female, poet, artist, Phillis Wheatley.

The California Lawyers for the Arts Association has grown tremendously under the direction of Robinson and her innovative programs. The 1974 founded, non-profit organization provides artists with lawyer referrals, educational programs, publications, dispute resolution services, and a resource library to people in the creative arts and arts organizations.  CLA, is a forerunner in providing support to the creative arts community and its residents.  CLA instills good will and benefit to art communities throughout California.

For more information on California Lawyers for the Arts and Attorney, Alma Robinson visit,