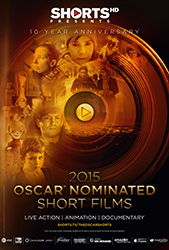 SHORTSHD, the world’s only short movie channel, shows no sign of being short sighted when it comes to their choice of OSCAR nominations. As we quickly

approach the most coveted entertainment red carpet event of the year, SHORTSHD, is celebrating a well-deserved 10th Anniversary. With an unprecedented, 450+ theater release unfolding across the US, Europe, Latin America, and Canada, there is no wonder these Shorts are a hot item for anyone’s evening matinee suite. Although SHORTS, the list of carefully selected and creatively timed productions serves to prove that one need not be a lengthy film to be interesting. Even more encouraging is the global taste used by the selection committee this year bringing flavorful script and dialogue from the countries of, Poland, Israel, UK, France, China, Switzerland, Netherlands, Mexico and the United States. The Shorts Channel HD, launched here in the States in February of 2010, and offers viewers a wholesome variety of short film productions in blocks of up to 30 to 60 minutes. The Shorts Channel gives a line-up of comedy, animation, and “Stars in Shorts”, which features celebrity casts. On January 30th, of this year, a compilation of these Shorts were released in national theatres and marketed throughout Europe, Canada and Latin America. The popular television satellite highlights Academy Nominated Shorts and each year creates a highly anticipated array of contenders. Shorts International and AMC Networks International franchises, owns and operates the Shorts Channel HD network. In September of 2012, a variety of short films were released theatrically under the name, “Stars in Shorts”.

It is only during this time of the theatrical release that audiences are given the opportunity, to watch the nominated short films prior to the 87th ACADEMY AWARDS CEREMONY .The Shorts have grown, to be one of the top grossing box offices independent film released packages, which stands equal in stature amongst full feature films. In the USA, 2014 Short Films earned a whopping $2.4 million, not bad for a shorty.

In 2015, the plateau of excellence remains steady and gushes forth as International films bring a delightful bit of sensitivity to many age-old subjects 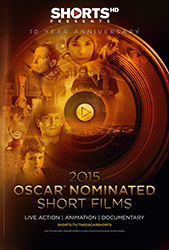 requiring human interaction. It is truly going to be a difficult task of picking from a group of films that are all very good. One of such favorites in the Live Action Shorts category is Northern Ireland’s, directors, Michael Lennox and Ronan Blaney’s, “Boogaloo and Graham. A simple enough story line involving two budding young intellectuals, Jamesy and Malachy whose father, a farmer, give them each a chick to raise. As one might imagine, the boys call their new-feathered friends, “Boogaloo and Graham.” Mom is the usual never supporting fully the man of the house type woman, thinking her husband full of wasteful fanciful ideas. The fun begins, when the well taken care of chicks become chickens with distinctive, individual personalities. The joy of watching the face of the two, one day want to be chicken farmers, their introduction to nature, and its natural form of species propagation, give a lofty touch to a sensitive and enriched topic rather than the usual, young boys; meet young girl dialogue wherein intimacy occurs. When mom announces that she is having a baby and that the two birds have to go, this does not sit well with Jamesy and Malachy, and they go on an all out birds of a feather better get out together, less they want to end up on the nights dinner table.

When, the two boy’s, “Boogaloo” and” Graham,” become heirs to a new treasured family commodity, the miraculous hatching of their first egg, the scene is nothing short of adorable. A must see film whether being offered in a short or long version.

“The Phone Call,” another good omen for a winning Short, capitalized on the extension of sensitive behavior of its cast. The directors, Matt Kirkby and James Lucas must have

intentionally cast a male voice and set their eyes on a female visual, giving the female who in this case is, actor Sally Hawkins, as Heather, a firmly set character of inner strength, will, intelligence, yet emotionally yielding, will leave you craving more of this one. Heather works as a crisis center phone line operator. As the hidden male character becomes more definite in the scene, the anxiety of silent anticipation sets in as the conversation continues. Sally Hawkins, whom you might remember as bohemian personality sister to Kate Blanchett, in Woody Allen’s, “Blue Jasmine”, was in rare form and cast as a perfect character. Gifted obviously as a good listener, Hawkins leaves the imprint for one to have an endearing heart, as she becomes a necessary link of life and death, for a recently widowed elderly man contemplating suicide. As the conversation deepens, Heather convinces the man that she will not leave him, as his wife had done when she died. The older man’s story brings tears to the eyes of Heather and she begins to reveal small bits about herself. The Short film offers a closer look and embraces feeling and emotions not always accessible in features. The process from beginning to end gives the audience a chance to concentrate and really fine-tune what excites them. Additionally, Shorts allow actors to stretch themselves, to work their skills up to the next level and then have room to take a breath.

Finally, and yet importantly, film means nothing without the ambiance of music to bring life into its many tales, its, laughter, its woes, and sorrows, to fulfill an emotional desire. An entity all to itself is music. What makes a character pop or a scene sizzle. To some it’s the sterility of a scene being taken seriously or knowing if one can play that scene with complete authority. Soundtracks are subtle but not over the top in all of the Short HD film genres. A nice blend of keeping one’s head clear and reasonable, along with creating tension with an adequate dose of drama, is a sure platform for enhancing Shorts star power. Short HD gives a memorable experience to all who desire to have shortened intervals of mental stimuli and intake less bytes of data.

The Short HD Channel, the little one that could, is an ode to an ever-shifting landscape of visual experience. A shadow hiding in the light of established formulas, the Oscar Nominated Short Film is the long term contract for mutual relations. It is the warm buttery taste left in one’s mouth and the comfortable settling of the stomach, after ordering the short stack of Blueberry pancakes and not the full one.

Shorts International operates Shorts TV and can be accessed in France, Belgium, Luxembourg, the Netherlands, Turkey, Romania and Eastern Africa. The Shorts film on-demand-service is also available on ITunes movie stores, Amazon Instant Video and in 54 countries all over the planet. Shorts HD, is based in London, England with additional offices in Los Angeles. The brilliant mind behind Shorts HD is, Chief Executive, Carter Pilcher.