No matter what, on the streets, color, creed, and gender don’t matter, and like some old Southerners say, “you don’t have to look for the devil, him got two heads and dey find you”. Such is the case in the award-winning duo of Josh and Benny Safdie’s, “Heaven Knows What.” The film story revolves around the love affair between two heroin addicts and the sudden death of the one, a 25 year old, urban park street urchin, Ilya Leontyev, played by trained actor, Caleb Landry-Jones. 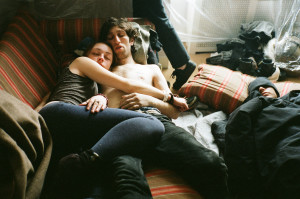 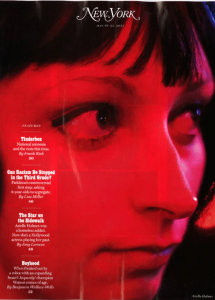 and lack of hope. The desperate affair between the hunger for immediate sensation that pushes night and day on the hub of youth who deal in the use of synthesized drugs in the US is at an all-time high. Right under the nose of parents, teachers, liberators, spiritualist, and religious leaders, lies the stench of the infestation of the sickness that plagues countries worldwide. Filmed a year ago, “Heaven Knows What,” went for the jugular using real characters to tell its story. An addict herself at the time of filming Arielle Holmes, who plays Harley, the mistress of Ilya’s addiction, challenged her condition while acting out the part. 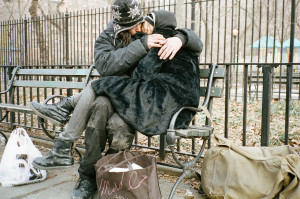 Unlike the 60’s when there were hippies, beatniks and the un-agreeables of society who objected to the established quo, rebelled and found freedom amongst others who walked together and marched together in masses; sharing like minds for a most worthy cause. Now in a neuro-complacent society drugs are an integral part of daily life, much like the pastime spent on internet searches and online game playing. Pharmaceuticals come in bright shiny colors; swallow able sizes and different strengths for a variety of desired effects. Holmes and Duress, first name Buddy, use their addicted driven lives to show how the dangers of usage and necessary stay over nights, on too many of the same streets, can kill. Mike the dealer, played by Duress keeps everyone in check and under his control by being the go to man. Because of the nature and details of the filming, Holmes although entrenched in her habit apparently did a great job, landing her a cover on W and several other articles including one in, “Play Magazine.” The task could not have been an easy venture with so many things that stimulate the senses being a part of her daily backdrop. 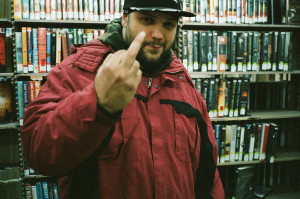 I found it intriguing that while their world only encompassed the nasty snarls of sweetly sickened addiction, they lived to die for each other. It is one thing to have drugs as a crutch due to lack of finances, education, and of course being from the hood of any major city in America. It is quite another mindset to use drugs as an outlet of rebellion against a system, simply because one doesn’t like what that system represents. Ilya a complete mess by movies end, catches himself on fire in a room, at an unspecified location, of which he garnered following a massive fight between he and girlfriend, Arielle. Interestingly enough the two part ways while headed for a different kind of trip, this one on a bus. Ilya forces the driver to let him off while Arielle sleeps feeling secure that she and Ilya can finally make a go of it.

As one might imagine, both directors demanded that all show up on time to do the work regardless of how high they might be or not. After all, the 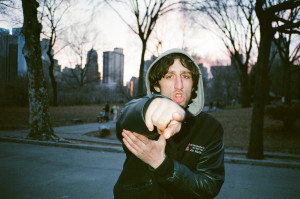 story is an actual recount of Holmes and her not so pleasant real situations with fellow heroin addict, Ilya. When Arielle decides to prove her love for Ilya by slashing her wrists her adoring homeless and on some other shit fan club edges her on. Ilya likes the head swell and undeniable attention received as a strung out girls object of affection. 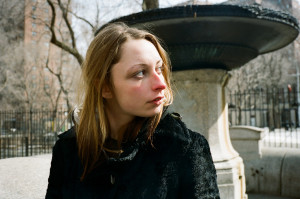 According to an extensive interview by the New York Times, Josh met Holmes while researching another movie and learned of her addiction and homelessness after the fact. Originally, the (2008) “The Pleasure of Being Robbed” and joint directorships of (2009) “Daddy Longlegs,” Josh now at 31, directed when Benny 29 was still in college. The plan was to cast Holmes in another movie however although the deal fell through Josh encouraged her to write her story, “Mad Love in New York City,” which inspired “Heaven Knows What” of which she was paid for. The movie carries the same impressionable vibe of Jerry Schatzberg’s 1971 chronicle of addicts in love, “The Panic in Needle Park.” Mr. Schatzberg’s advice to Josh, “never cast junkies in your movie said the quotes the Times article and the, “Needle Park, “area has since been cleaned up a bit. 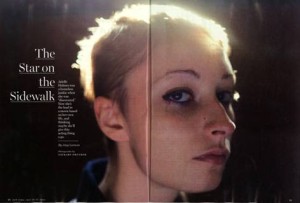 At the writing of this article, Arielle Holmes, who plays Harley, now lives in Los Angeles, is at present, auditioning, networking, and claiming a boring life in comparison. Latest reports suggest that she is clean but wants to make sure that people know what life is really like living day to day with addiction and homelessness. Buddy Duress was just released from prison in March of this year, and has a history of convictions in NY and Jersey. His most recent conviction is in NY for criminal possession of a controlled substance. In an acting class at age 29, Duress wants to continue to act, and has borrowed a few films from the Safdie’s private collection. Caleb Landry-Jones the most laid back of the actors resonates with the neighborhood and shows up from time to time on the set.

Each character has been encouraged by the films profound effect on their personal lifestyles and
for that, all I can say is, “ditto” and so are we.

Photos and poster for “Heaven Knows What” provided courtesy of Radius-TWC and Marina Bailey PR.