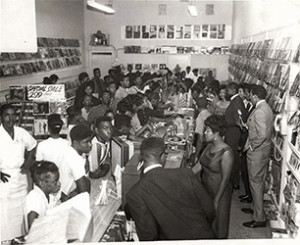 The quaint, LillianTheatre, located on Lillian Way in Hollywood made the best decision ever by becoming the extended run residency 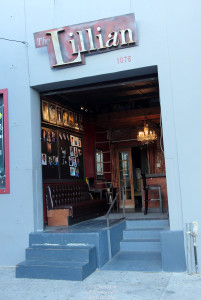 of the, “should be on NY Broadway”, and an HBO Special, “Recorded in Hollywood’. The outstanding cast gave the audience something for their evening supper table gossip talk. The re-enactment of Dolphin’s style and business presence played by, Stu James, deserves the ovation showered upon him at shows end, by fans and family. We had the opportunity to meet and get an up close and personal with Jamelle Dolphin, the grandson of John Dolphin. The musical based on the ten years of research done by Jamelle and the book, “The John Dolphin Story,” written by Matt Donnelly, continues to receive rave reviews.

The story goes , John Dolphin, an African American, became the first to start a record label, marketing and promotion division and record store, all at the same time, right here in Los Angeles on Central Avenue. The world premiere of the musical featured a cast of such talent that the reenactment of the period of 1948 is incredibly believable. Dolphin opened his record store in South Los Angeles, off “Central Avenue,” as a business savvy entrepreneur, he approached Hollywood in hopes to do business there. At the time, predominantly white areas did not allow blacks to do business and that is how John Dolphin came to call his Central Avenue store “Dolphins of Hollywood.” 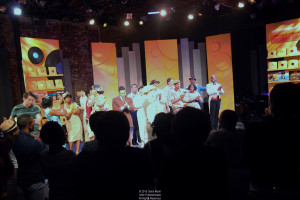 Using a 19-member ensemble, the score includes 16 original songs by Andy Cooper, including “You Send Me, a romantic’s favorite by 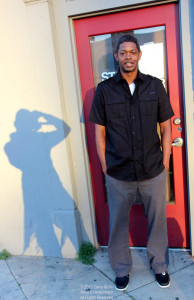 the incomparable Sam Cooke. Denise Dowse directs; and one can easily see why she is a four-time NAACP Best Director recipient. Using the delectable sounds of “The Penguins ,“ Earth Angel”, and the Hollywood Flames, “Wheel of Fortune” gives the feeling of being in Dolphins store and sifting through his album bins. Choreographer, Cassie Crump, hit home base with an original piece and believable dancers. Musical director, Stephan Terry’s timing of meshed surrealism features female vocalist that truly sing like Angels.

The entire production at Hollywood’s Lillian Theatre is as regal of a delivery as any larger venue. Dolphins many artists recorded a host of R&B, blues, jazz, rock n roll, and Western music, which matched his experimental mind set, as well. Using unique and eclectic label names, “Lucky,” “Cash,” and Money Dolphin the coined name, “Recorded in Hollywood.”

Smooth, deep throat crooners like Sam Cooke and Jesse Belvin headlined. A solid choice and sure to attract women and a multitude of music lovers, on hand were destined to be stars like, Charles Mingus, Pee Wee Crayton, and Major Lance. Dolphin had a natural eye for talent. As the record shop to be 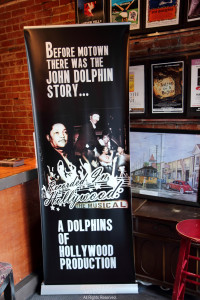 seen and heard, John hired a young hip white boy DJ from round the way, his name, Dick “Huggy Boy” Hugg. Along with cohorts Charles Trammel and Hunter Hancock, you could hear the records spinning from the front store window All, Night, Long. 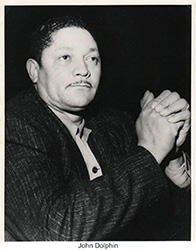 e in his way of thinking, John set up live interviews, in store as well as artist meet and greet for customers, who essentially stood in line to see, hear, and buy. Offering a  Buy One, Get One Free store sales policy the store enforced a never before done, 24 hour stay open policy, seven days a week. Playing a black music format on local radio station, KRKD, Dolphin paced his marketing strategy drawing young white kids to his South Central non-integrated neighborhood and selling black music to them.

This bold act by a black man was unheard of. Of course, the act itself bore unpleasant consequences. Local police swarmed down John Dolphin’s throat; enraged by the fact that, the store incited the comingling of blacks and whites under the same roof. Dolphin managed to develop this unique, multi-level paradigm during mass segregation. 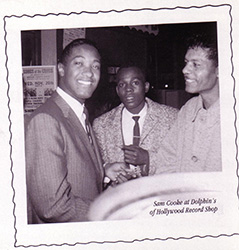 As Dolphins promotional ideas gained in popularity so did his taste for women, fine threads, and arrogance. A not to be ignored disgruntled employee named, Percy Ivy, had known Dolphin since his Dolphins of Hollywood store inception. Ivy murdered the music mogul and recording label executive inside of Dolphins store. Teenaged songwriter and piano player, Bruce Johnston lay witness to it.

76 year old and longtime entertainment publicist and manager, Lynn Coles, grew up on the Southside of Los Angeles (now called South Central), gave her input on the mood of Los Angeles at the time. For someone like me who got the music bug at birth, it was “Great Expectation.” All the food, housing, clothing, including sports and entertainment lie between Washington Blvd to the North and Slauson Blvd. to the South.  At its core was Central Avenue. We lived down the street from the Dunbar Hotel m named for Paul Lawrence Dunbar. Built in 1928 the Hotel would serve as a luxury spot for Negroes visiting Los Angeles. Two other hotels were Black owned, the Clark on Washington and the Watkins on Adams Blvd. In this part of town each day seven days a week, you heard music. 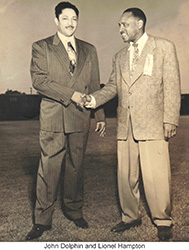 As a child, I spent my allowances first on 78’s, then EP has (extended play) and LP’s (45 RPM) but on Vernon Avenue where Mom and Pop stores thrived there was DOLPHINS OF HOLLYWOOD RECORD STORE. “John Dolphin”, featured artist performing in a window store long before Wallick’s Music was built. There was also featured a DJ playing latest hits, that one could hear on the street. As a record label owner, Dolphin was able to afford for artist to record in the store. Local artist like Stoney ( Lawrence Stone) and Jesse Belvin, would not have a chance to be heard otherwise by outsiders. Both died tragically. Stoney took ill and Jesse was killed on the highway. If memory serves me right, Bill Sampson a local on-air DJ, broadcasted from that very same storefront window. On the weekends in particular, you would see Cadillacs, Buicks, and a range of other sleek foreign cars parked on the street in front of the street. All the advertisers and patrons in that area frequented Dolphins of Hollywood.

In addition to being one of the supporters of L.A’s first outdoor arena Jazz Festival, “Calvacade of Stars” brain child of Black entrepreneur, Leon Hufflin. Joe Adams former longtime manager of the legendary Ray Charles made weekly broadcast for KWKW located down the street from Club Alabam and the Lincoln Theater.”

For those who have not gone to see the musical, you’re in for a treat. Your head will spin, knees tremble, and your feet will stomp with a thunder so loud, that the shoes of those who once danced on the floors of “Dolphins of Hollywood”, will slip and slide their way clear across Central Avenue.