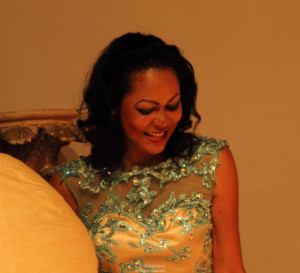 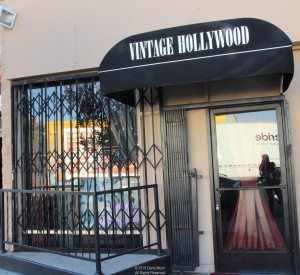 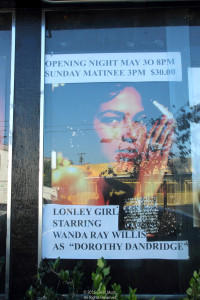 Dandridge whose death records recently made their celebratory debut to the public from 50 years ago. The play a one-woman portrayal of the life and tragic circumstances surrounding Dandridge’s artistic talent, her life, and death are elequonently delivered by the beautiful, Bermudian born actor and vocalist, Wanda Ray Willis. Willis portrays with an uncanny familiarity the up and downs of Dorothy’s life and the numerous relations that she came to have over the course of her short but monumental career. With a background in singing, acting, writing, and music, Willis carries the spirit of Dandridge and proves that her wealthy background of professional training still reigns throughout her travels to NY, Japan and locally in Los Angeles where Wanda Ray lives. This also brings to mind the not so evident friendship between Dandridge’s and her white counterpart the illustrious and well-loved Marilyn Monroe. 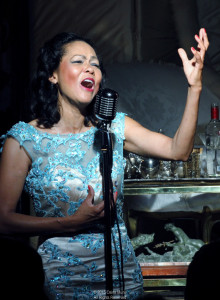 had set the pace for what was 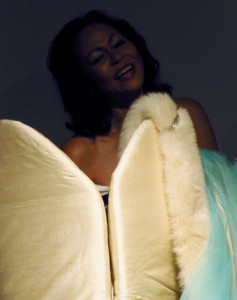 to become Black Hollywood. Donald Bogle, author of “Bright Boulevards” and “Dorothy an Autobiography”, talks with vivid accuracy about the comings and goings of the elite folk of back in the day, say around the 1900’s when he states that blacks and whites were alive and doing well in Los Angeles. At the time, the city housed a variety of influentials, amongst them, Lillian Gish, D. W. Griffiths, and a beautiful Black Spaniard that called herself, Madame Su-Te-Wan. Turns out that apparently the Madame took herself and her three children very seriously so much so that she moved all the way from NY out to Los Angeles just so she could follow through on a promise made to find

D.W. Griffith. Thanks to Te-Wan’s bravery and commitment to making a better life for she and her young children her 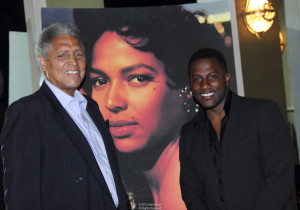 descendants came to own most of Los Angeles County and were called Black Spaniards. The areas known as Beverly Hills and West Hollywood were the back yard estates of these Spaniard families. 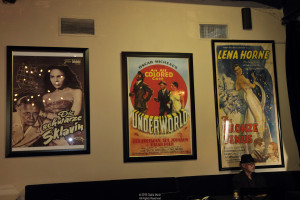 According to writer, director, Leroy Richardson III, Dorothy had the, it factor. Heralding from Cleveland, Ohio, the depression of the war left many without work however, the Dandridge sisters, also called, the Wonder Sisters intended for that not to be the case and headed to the stage prompted by their mother, Ruby, who had a bit of talent herself. Glamourous, talented, and strong, Dorothy Dandridge at the time earned more than any other actor in Hollywood, black or white. Her name and particular kind of beauty until this day, never received the warm reception, or adoration that Monroe received, well at least not publicly. Dandridge had a way with men, but when you’re curious, famous, warm, and looking for love, men will hang. Her being black enhanced her already deep and rich personality, however, it didn’t fly very well that she was so loved and so desired alas eventually the entertainment industry took back from her exactly what had been given, and more. 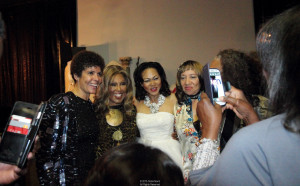 We’ve all heard the myth, or not, “once you go black you never go back”. Halle Berry, gave life to the part of the Hollywood version of the Dandridge legacy however; the story is so much more than that. Halle played a black woman who had lost husband and son, to the white man and his system, in her Oscar won role, “Monsters Ball.” Like Dandridge, Berry is a cross culture phenomena and outside of Tina Turne 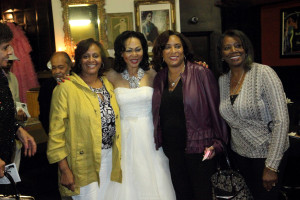 r, seems to be the only other woman of color that is recognized creatively as a talent. Oprah pushed through distinguishing herself as a business icon and respectable actor, gaining respect and recognition globally, but none the beauty and broad range of talent as Dandridge. Dandridge played lead in musicals, with top leading white male actors at a time when it was unacceptable for black woman to do so.

Lena Horne another acceptable, yet ostracized actor, had made headway in film and on Broadway, but never quite made the LA scene her private world. There would be no such nonsense for the Dandridge sisters 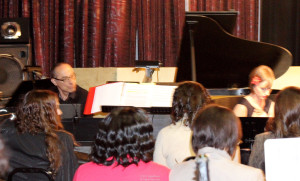 , and Ms. Dorothy, who learned to work her connections on both coasts.

As it were in the case of Peter Lawford, Dandridge’s unsettled lover and the only one, “I’m told”, who held 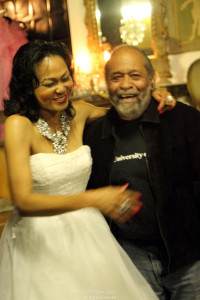 steadfast in her heart. Lover after lover had come and gone in the starlet’s life. Few became husbands one Jack Denison, who to this day is held in mind as a suspect and possible murderer. It was Otto Preminger, who would indeed come to love Dorothy and lead Bogle to Vivian Dandridge. In addition, there was the younger of the Harold Nicholas brothers, whom she married and had her one and only child Harolynn. Lynn would eventually become a ward of the court. Lynn was born with a severe mental disorder, perhaps a precursor to Autism, and needed constant care and unable to be left alone. Dorothy worked hard to earn money from every aspect of her talent in order to take care of the child. One could make the assessment that guilt and the fact that money was dwindling fast, had a huge effect on her mental stability. 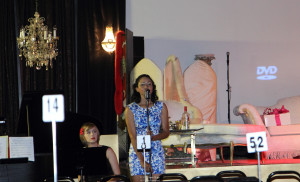 Both Marilyn and Dorothy were the times unsung heroine’s speaking out of turn purposefully and with the intent of having a voice, whether one wanted to hear it or not. Marilyn was the other mirr 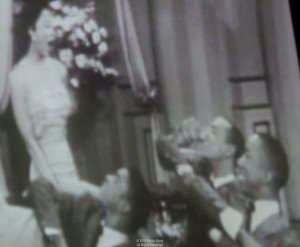 or of remarkable charged for being alluring and had sex with not just one but both the Kennedy brothers. While Monroe became taunted because of her sexiness, Dorothy was charged with being, black, beautiful, and intelligent. Both women had access to a variety of male studs positioned just for their pleasure and Dandridge was no exception to this rule, she loved men and men loved her back.

Always ready to deliver creatively with poise and grace on screen, Dandridge made known her love for the 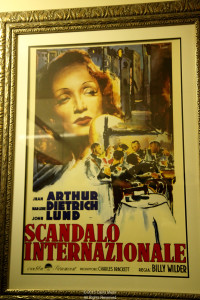 European culture as she had lots of exposure by being married to Preminger. Denison who also acted as her husband and manager led the beauty to lower quality engagements and ultimately to financial ruin. Dorothy became a known socialite landing herself in circles of the prominent and well respected. As Dorothy’s name and reputation spread throughout the world of entertainment, jealously, backbiting, and affairs, one with singer, Nat King Cole began to take their toll. Regular black eyes by Denison and the combination of pills and alcohol, began to mar Dandridge’s talent and abilities. Soon she would become a bed ridden yet active ball of nerves. Raped by her mother’s lover, Geneva Williams, she had attempted suicide three times. Life of tragedy or necessary circumstances towards the end of her life the star had a complete mental breakdown and placed on prescribed doses of Tophonol commonly known as Prozac, and used to treat depression. The actor hospitalized for severe and acute anemia. had to lie about her finances, in order to protect herself from Dennison.

Finally gaining a bit of excitement about her new found list of to do’s and her plan to go to NY study acting and the stage in New York, Marilyn who had been a support for her in between gigs or not, had been found dead in her Hollywood apartment. A few weeks later Dandridge would meet with the same demise.

Would today’s new media be accepting of an interplanetary goddess, would we love 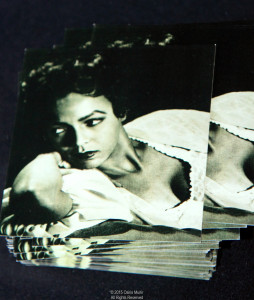 her? Would her talent find her 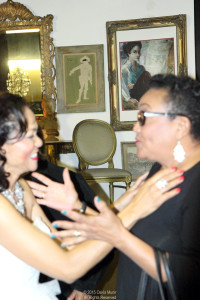 on the get on the “Empire” bandwagon or confined to a certain genre?

How would she be portrayed? Hollywood had survived the early 1900’s but had Black Hollywood survived? Have we all been bamboozled into thinking that we’re in the mix? Is deception our only reward or have the spirits of Madame Su-We-Tan and the Black Spaniards previous owners of what is now called Beverly Hills and West Hollywood, risen from the annals of disgust and with hatchet in hand come to claim and threaten to shut down the extended version of the Disneyland we call, Holly and Wood.

Will Dorothy Dandridge ever have a stamp, or celebrated with the same vigor on the date of her birthday same as Marilyn? Who knows but one thing is for sure, Vintage Hollywood will make sure that when you see Wanda Ray Willis transformed from 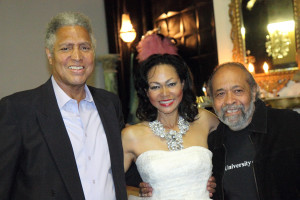 Willis to Dandridge, you’ll once again feel the sweet taste of a lonely girl’s lips upon your weary head and feel the overwhelming need to say, “ I love you Dorothy, I love you so much”.