When the 2017 Who’s Who Marquis Award winner, Audrey P. Franklyn talks, people shut-up and listen.  If the subject is on her over 40 year career as the first female creative jazz promoter and the “First Lady of Jazz” Ella Fitzgerald then you had better get a glass of wine and grab a seat as you could be in for a long stay.  Audrey started her long historical run in the music industry when she was but a teenager at 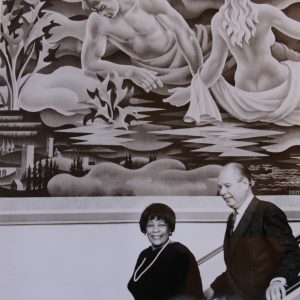 Hollywood High School in Hollywood aka Los Angeles. Her 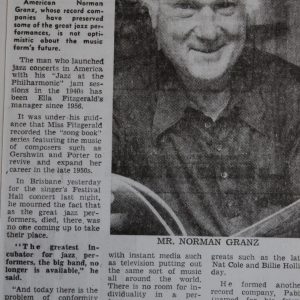 bold and feisty personality grabbed the attention of KLAC’s DJ Gene Norman who hired her as his “Girl Friday”. When Norman discovered that Audrey was more than just a coffee bringer he began to prime her for bigger things.  One of the many projects that Norman had going was a monthly talent showcase at the Pasadena Civic Auditorium. Commanding the best in the industry his monthly line-up included the likes of Dave Brubeck, Count Basie, Oscar Peterson, Nat King Cole and a host of others who would go on to become jazz and music legends. This time was the best of times for young little Audrey who had no problem showing just how creative she could be when it came to the marketing and promotion of concert music. 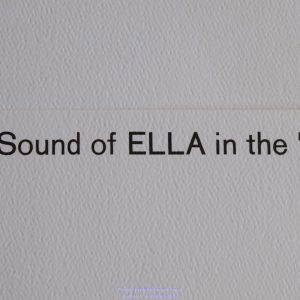 As soon as she knew what lay ahead for Granz success 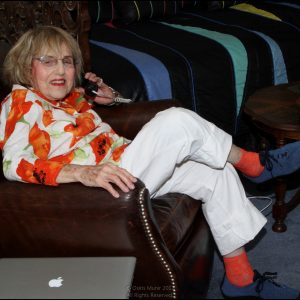 bound enterprise, there was no stopping her and Audrey began to make the transformation  from little Audrey to Audrey the creative trail blazing creative promoter. With her quick witted mind and vibrant personality she began to work on promotional ideas that during those times were out of the box.  Her brilliance reigned throughout prominent entertainment business circles garnering the attention of high profiled musicians and industry elites that could make a difference in how effective her PR campaigns would be.  With the support of Granz, and one of her favorites satirist Tom Lehrer, Audrey had the confidence as a young beautiful and hip woman to carve out a niche that would also serve women that would come to follow in her footsteps.  Lehrer donned her as a blooming Impresario. The Interlude and the Crescendo, two nightclubs owned by Granz eventually 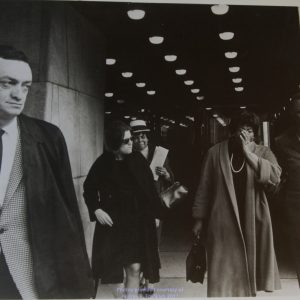 became the center of focus for Audrey who by 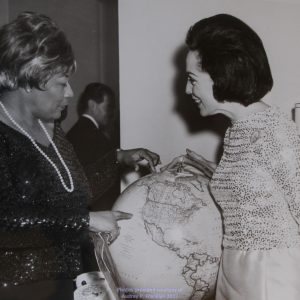 this time had become and expert at not only rounding up talent but negotiating the when, where and how they would be booked and the costs incurred when producing a show. In essence she was the producer and director for how things started and the end result of those things.  The result was always above expectation.   Getting results were key in an industry that is based on sales and images and. Audrey has proven that she had the it, amassing sold out concerts, using clever press kits and savvy promotional items that highlighted the illustrious careers of Della Reese, famed Gospel singer, Mahalia Jackson and Andre Previn amongst others. 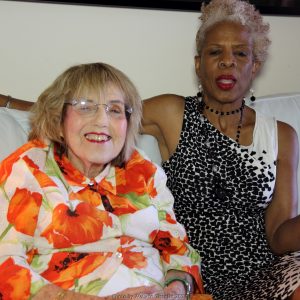 In 1959 things heated up making a way for Audrey to get a contractual agreement with Ella, the songbird for an appearance at the Santa Monica Civic Auditorium under the aegis, Audrey P. Franklyn Presents Ella. Saturday Night, December 26, to a sold out concert with box office turn a ways. Impressed, both Ella and Granz a music producer and owner of Pablo Records, which was 5 minutes away and named after close friend, famed artist, Pablo Picasso, loved what Audrey did and at first hired her on a freelance basis to do specific promotions related to media for their production company which they coined as, Sallie the backward spelling of Ella’s name. After taking on yet another responsibility of being the go to for Ella again, Audrey stepped up and showing her exuberant talent that had yet come fully to the surface as Granz prepared to take Ella onto her first grand European Tour with 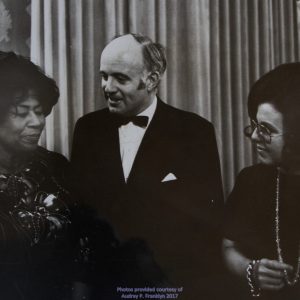 Audrey at the helm of promotions.

Upon Ella’s returning to the US after a six-week European tour in 1966, Norman Granz offered Audrey a proposal that if she could devise a phenomenal promotional campaign for New York’s Americana Hotel where Ella was scheduled to appear then the position of  Ella’s full time promoter would be hers.  This was a dream come true for Audrey who was more than happy to take on the assignment. 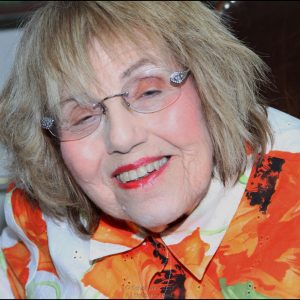 With the support of Rand McNally the idea was to present each VIP with a very expensive Globe of the World, which included Audrey’s fancy press kit.  New York’s Mayor proclaimed the Day Ella Fitzgerald and Ella was to be presented to the United Nations Assembly with a luncheon and a national radio interview at the UN hosted by William B. Williams, an outstanding radio personality held in high regard.  The Americana Hotel, Philharmonic Hall, Carnegie Hall, Waldorf Astoria (NY) Constitution Hall in Washington D. C., Massey  (Toronto) Academy of Music in Philadelphia, Cleveland and Pittsburgh and San Francisco’s Nob Hill Fairmont Hotel.  Pablo Records produced such celebrated talents as Duke Ellington, Count Basie, Oscar Peterson, Sarah Vaughn, Joe Pass Dizzy Gillepsie, Benny Carter and of course, Ella.

In Audrey’s 30 + career span she there have been many accomplishments, Ella of whom she is most noted for opened doors to prestige from 1959 to 1996, and she continued to work for until Ella’s death in June of 1996.

Unusually gifted, Audrey continued to produce showcases for upcoming artists, who were more than willing to get the attention of Audrey’s high profile audience.  In return Audrey was able to secure talent for her prized Cable Network show which she regularly hosted from 1977 to 2014.  Her countless interview appearances add up to over 150, Gypsy Rose Lee show of San Francisco being one of her most memorial experiences.

Audrey P. Franklyn, is truly a force to be reckoned with. She has been a cultural enthusiast, a beacon of hope and courage that has proven that success has nothing to do with age, sex, or experience. Success can be gained as Audrey says, through having a mentor, being creative and having fun.  Her zest for life and the pursuit of big ideas and creative promotion is something that comes as natural to Audrey as apple is to pie.

Oh and lest we forget, she loves to show off her collection of cool shoes that come in 15 colors, all the way from Portugal.

For more information on Audrey P. Franklyn please search https://wwlifetimeachievement.com/2016/12/12/audrey-franklyn to view a list of her many illustrious accomplishments and view her comments and interesting stories on Facebook.