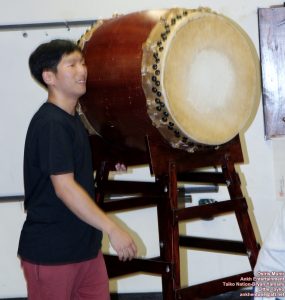 Upon meeting Bryan Yamami, the managing director for the Los Angeles based, ‘TAIKOPROJECT”. I suddenly felt spiritually 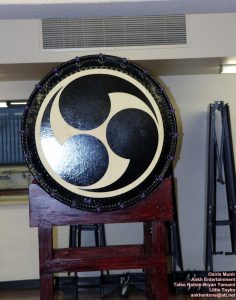 lifted by the sound of the taiko. I thought I had come to the wrong address, because on the corner of 1st and Central in Little Tokyo, there stood a Buddhist Temple however, the basement of that Temple is where I heard some loud thumping, and I knew it was the sound that only taiko could make. The practicing performers for the three-day concert series were vigorous, so much so, that if this was a rehearsal, then, I just could not wait to see the live performance.   There are only a few more days left until, the celebrated concert which is a part of the 2014 World Taiko Gathering, set for Saturday, July, 19th and Sunday, July, 20th at the Aratani Theater, in Little Tokyo. Special guests, “TAIKOPROJECT”, Chieko Kojima and Eiichi Saito (KODO), Kaoru Watanabe (New York), TaikOz (Sydney, Austraila), Kagemusha Taiko (Exeter, U.K), Taro Kobayashi (Tokyo, Japan), Sen-Rai (Sendai, Japan) are amongst the 500 scheduled performers would be on stage together for the first time. 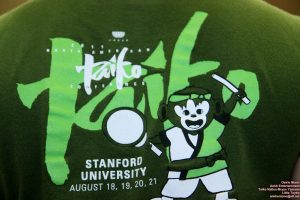 The myth of how the taiko drum came to be is as endearing as most legends of Japan and in general most Asian cultures. Unlike American society, the reverence and respect paid to ancient tradition, is both elegant and honorable. As Bryan mentioned, the tradition is in place, however augmented slightly, and applied to modern dance and music culture here in the States. According to legend, a Shinto goddess, emptied a barrel of sake and then proceeded to jump on the barrels head. The goddess 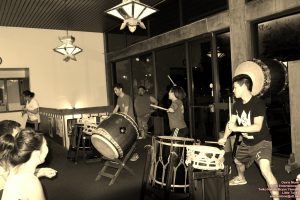 stomped so furiously that the percussive rhythms were loud enough for the sunlight goddess to hear. The percussive sound enticed the sunlight goddess to abandon her cave dwellings and come out, thus goes the myth of how taiko came to be. I also took note in speaking to Bryan, that he was fourth generation Japanese. His family had experienced similar cultural setbacks as some cultures experience in the US. His family had been immigrant laborers and worked in rice patty fields.  In his recollection of his ancestry, I was reminded of the harsh and severe treatment that slaves and other immigrants had been given, upon arriving to a foreign land. In concert, “TAIKOPROJECT” highlights this kind of tradition, and all of its glorious history told by the sound of the taiko. Bryan and I talked about the series, which will intermix a three-day workshop, combining storytelling, music, and choreography. The series will also include workshops and discussion sessions. “Anyone can learn taiko, and we are here to help”, Yamami said. “TAIKOPROJECT” has appeared in televised commercials. Their live performances have been collaborated with entertainment legends like, Stevie Wonder, Justin Bieber, Alicia Keys, John Legend, and Usher. 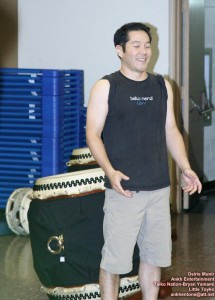 According to Yamami, “a lot of artist hear taiko and want to incorporate it into their hip-hop tracks and musical arrangements. The 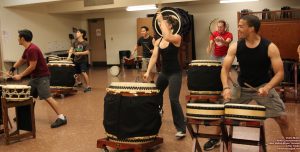 manner in which we present taiko makes it easy to use in nearly all musical genres.” The upcoming concert series will bring participants from Asia, Mexico, Canada, Europe, South America, Spain,  US, Australia, Japan and Belgium. Part of the process of selection is to call around the world, in search of the top taiko performers who participate according to their level of experience. What you may not know is that there are schools and universities that have active taiko clubs, a treat for any developing taiko performer. Bryan started at age seven, reluctantly of course, but now, he is so happy that his parents forced him to learn the ancient art of beating the taiko drum. NEA Heritage Fellow Grand Master Seiichi Tanaka of San Francisco, as he affectionately called by his students, is the highlight and part of the special guest performance.

Tanaka Sensei, is a legend and known as the “father of American taiko”. During the 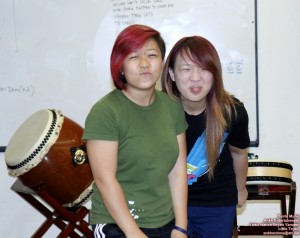 finale, “TAIKOPROJECT” will perform a choreographed piece directed by the Grand Master, entitled”, “Expanding”.  Delighted by the interview, I left Bryan to his basement of rehearsal, swollen with the sound of the powerful taiko, I could somehow feel the presence of the Shinto Goddess and the loud thumping of her feet echoing off the walls.

For more information on “Taiko Nation” and the 2014 World Gathering