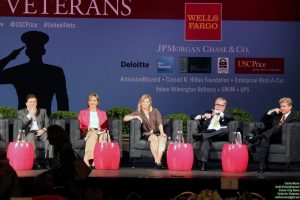 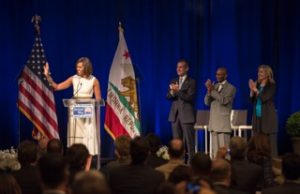 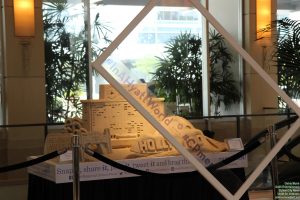 Today marked the first time that I have ever laid eyes upon a “First Lady, “in this particular case, the first lady’s name is Mrs. Michelle Obama. What makes her special is not just her 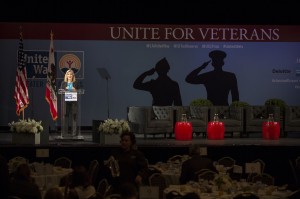 making recorded history as the first woman of color to set feet on the White House lawn but also because of what she stands for. Unlike legendary mixed heritage actor, Dorothy Dandridge, who after performing in a white venue could not let her toes touch the swimming pool, this daughter of the sun, didn’t need permission, her presence alone commanded it. Mine eyes were glued to the podium, as we all waited for the real live and in the flesh version of Mrs. Michelle Obama, to step onto the stage. I had done everything except sell my dreams, to get the “powers that be,” to understand, that I had to attend this event. Even if I had to get up before sunrise, my very life depended upon it. A few begs later, I was told, “you’re in.” 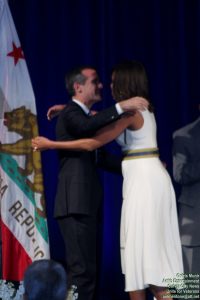 The Hyatt Regency was the perfect place to host government officials, 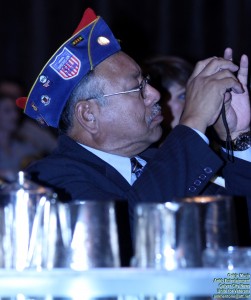 business leaders, and local agencies together. It had done a fantastic job at running two sides of escalators up and down. The prestigious Century City based hotel, set up three or four types of security, including homeland security, hotel staff security, and any undercover FBI, CIA that could go undercover. The Regency wanted to make certain that we all knew that this was no ordinary, run of the mill Continental breakfast brunch. Even if they didn’t have a sign on their chest that read, the titles aforementioned, it sure felt like something very serious was about to take place. The promise of interviews with United Way’s, CEO, Elise Buik, pronounced Buick like the car, and Rick Reyes Employment Development Coordinator for Vets at United Way, gave us some relief, but we could all sense that  the interviews were just entrées before the evening meal. In this case, consider that Elsie Buik had worked her way up the ladder, beginning in management and marketing before becoming the CEO of an established since 1854 organization, United Way. Buik talked openly and honest about how it was to be a mother, wife, and CEO full time. Elise spoke of the balance that inevitably happens when trying to do all three.  We spoke of what challenges lay ahead for female veterans fresh off the battlefield. “The females in this war, held the highest statistics for ending up homeless, without jobs and even worse, without hope,” Buik replied.  The transition was a mind bender. Rick Reyes, a veteran, employed by the United Way as the employment development coordinator, expressed some flares of hope for the program that Garcetti, Mrs. Obama, and United Way were going to tackle. His job requires deep and unyielding commitment.” Veterans have something special to offer, Reyes said, “they have skills that are at managerial levels upon leaving the military.” “We have the discipline, the tactic skills, and a leadership level of 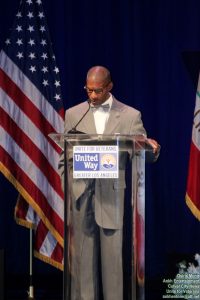 understanding that you cannot get anywhere else except from service in the military.” As selected media approached the secured door to the room, where the big event was already in

motion, I could not help but think wow, this is really like water for chocolate. The darkened room did not give us much light; however, it did offer us intimacy. We could never repeat the experience of being that close. It would change us forever. “United for Veterans”, was more than a United Way of Greater Los Angeles coordinated event, it was a merging of cultures.  Mayor Eric Garcetti, and the First Lady, gave Veterans both a name and cultural identity. The combination of like minds could make for a vigorous cause that could be as effective at battling adversities, as the hammer of Thor is against would be assailants. Either way the delivery of intent was the same, homelessness amongst U.S. military service members, had to stop, and it had to stop, NOW. How can humanity exist amongst inhumane situations, this is the question that many Veterans have asked before dying in combat, or returning home to an even stranger set of circumstances. This Summit was for those Veterans, who now have voices thanks to support organizations like the LA County Federation of Labor, AFL-CIO 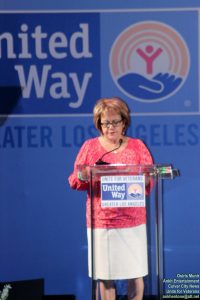 , whose, Executive Secretary –Treasurer, spoke with high enthusiasm although amidst a foggy and a slightly humid day. Laura 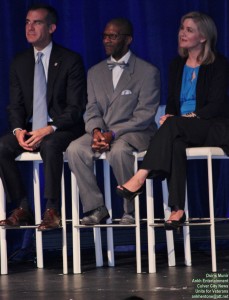 Zeilinger, Director of National Programs, and Field Support, U.S. Interagency Council on Homelessness, Stephen Peck, President and CEO, U.S. Vets, Elizabeth Garrett, Provost, University of Southern California Price School of Public Policy, spoke their concerns. These bits of valuable and well thought out strategies were the side dishes. These dishes, temporarily, fulfilled the hunger for help, churning in the stomachs of hungry veterans, looking for a way back to civilian life. This “Unite for Veterans” event was for Veteran Americans, of all cultures, all walks of life, who were willing to give their lives, so that the citizens of this country could wake up to Starbucks rather than bullets flying in a consistent stream, past the door. Veterans who held the United States of America’s anger close to their hearts, and who fired guns that killed someone else’s children, made it possible that our children could play alongside each other, without having to worry about rape and contortion. These vets made it possible for us to be free to laugh and love, and have a variety of choices and freedoms that no other country has to date. This was the Summit to discuss, to plan, to place a future in the hands of a million voices screaming, “WE CAN, DO IT.” At last, after running  the red velvet rope laced with gold post, crossing over the bar scanner for security purposes, getting up much earlier than usual, we heard, “and now without further 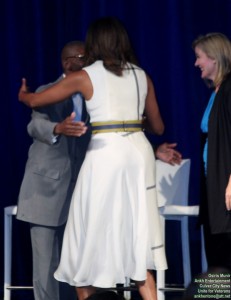 delay, lets welcome to the stage, out “First Lady”, Mrs. Michelle Obama.”. If you think that Aretha Franklin is the “first lady of soul,” then you had better meet Mrs. Obama, before locking that title into your mental express. Soul, I mean real soul, the part that cares, that hurts when you hurt, that feels when you feel, cries when you cry and when your heart smiles with laughter and glee, Michelle seems to revel and bask in it, just as you do. This was the grand person, who presented much bigger than one could have ever imagined. The tablets, IPhone, and cameras went wild as she brushed past an adoring crowd, with a creamy white dress with a hint of brown that swung ever so swiftly, as she rushed onto a stage, clearly not big enough for her glorious majesty. The woman took the stage and grabbed the mic with purposeful intent as she greeted us with an ever-gracious smile. In my heart, I felt deeply for her. How could she travel to far places, tend to two growing teens, keep her man inspired and satisfied and be true to self, whew! I was exhausted just thinking about. The vigor of strength that she showed with just the movement of her hands and the tone in her voice gave everyone the certainty that everything was going to work out, even if we didn’t make the effort, Mrs. Obama waved her hand like your grandmother, shook her finger in your face and you willingly complied. Our great nation could once again sail as a spangled banner, if we would just with one mind and one goal, “Unite for Vets.” Without hesitation, the audience of concerned citizens, news media and dignitaries clapped loudly as our first lady proceeded to leave the stage and walk down into an adoring circle of applause, cheers, tears, and who in one solid voice, said, “YES WE CAN.” Note: Photos on the left of Mrs. Obama at podium waving to the crowd and of Elise Buik speaking at the podium are provided courtesy of photographer, Charlie Lopez.