e Youman’s “The Toki-Girl & The Sparrow-Boy Chasing Dreams, Book 2, is a must have for any collection of literary works. The book is loaded 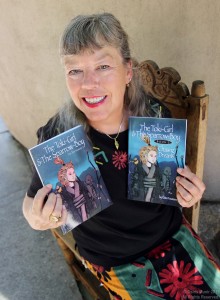 with interesting bites of Japanese Folklore, European culture and offers a diverse group of general behavior within a framework of mysticism that follows solid guidelines of truth. A proud history in its tradition, the posture of the general populous held during the 20th Century Meiji Era is as thought provoking as is the transformation of the Toki-Girl now Azuki and the Sparrow-Boy, now Shota. Women in particular although subtle in behavior, showed themselves to be powerful when sharing public offices and various positions in the Church with their Lords. Lady Satsuki, Anko’s mother, and the wife of the powerful Lord Eitaro was one such woman. Considered an extremely skilled politician, contrary to belief,

Satsuki influenced policies and decisions in a parallel and virtually unknown society of women. Although Japanese women lead from behind, they are revered and not disregarded. Feathers particularly those of the rare Toki-Girl were a high-end commodity for those in positions of power. Not good looking, tall and big bird awkward the Toki bird were sought after for their white with peachy orange overtone feathers that were also used for hats. As Claire mentions in the interview, even at death’s door their mothers’ intention was for Shota and Azuki to maintain their ability to morph from bird to human and back, not conforming to one or the other but to both. The special Toki-Girl had this ability and with feathers, she would be in high demand. Youmans innate and natural gift in writing expresses this wondrous adventure, in authentic Japanese style. One can interactively, through reading share the beat of the life of Master Yuta Sensei a mendicant. The magnitude of lives bound by uncertainty and duty to one’s parents leads Azuki and Shota to gain support from both sentient and insentient beings, the karmic vines of their daily lives ultimately shed light on the future and they are at last free to chase dreams. The DaiTengu give the Harry Potter character Lord Voldemort a cool run for making big and bold magic happen as well as blatantly harass and try to stomp out humans.

The Toki-Girl & The Sparrow-Boy is a fantastic read and mental workout for the entire family.

EXCERPT from The Toki-Girl and The Sparrow-Boy, Chasing Dreams, Book 2 series of 3.
22 Azuki knew it was her own fault. She was her own worst enemy. She was overjoyed to go home. The home she remembered, to live with her brother and her newfound uncle. She was thrilled that Shota could keep his boat and pursue his sailing. And she had ruined her opportunity with her impetuous foray into the night to see the remarkable loom. Why had she not thought of simply asking Uncle, and she must remember to call him that now, if they could go see it, while they were in the city”

For more information on Claire Youmans “The Toki-Girl & The Sparrow-Boy, Chasing Dreams,” go to www.thetokigirlandsparrowboy.com.

All images of Claire Youmans provided by © Osiris Munir 2015.

Images of Toki-Bird, DaiTengu and other Japanese images provided by Google.