We can all relate to in one way or another, the process that goes along with, playing outside in the local community. Usually, after school we would change from our nice school clothes to our go outside and play clothes. Playing involved some sort of interaction with the neighbor’s kids, next of kin or oneself. For some there were rocks and marbles available for chunking at bullies, Jax and HOPSCOTCH. 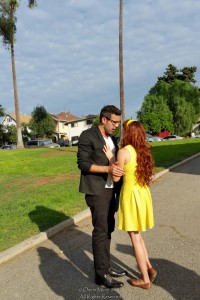 On October 31st, “The Industry’s “Hopscotch the Opera” opens to the general public.

Now just imagine the concept of HOPSCOTCH applied to a living breathing and moving expression called, Opera. Imagine your friend in an intriguing story carefully designed by a group of six LA based composers and six LA-based writers, at the height of their artistic prowess. Not there yet, kick back and lean forward, hear that, those sweet and magnificent textured layers of ear-resistible waves  brought to you by the wizards of sound, Sennheiser. The evening’s entertainment produced by an eclectic group of artist and creators highly motivated by their intuitive and distinctive artistic director, Yuval Sharon’s, elegant adaptation. 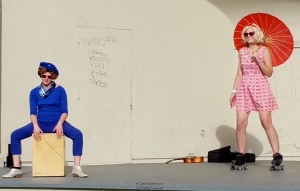 Hopscotch involves jumping horizontal to vertical from one drawn out chalked square to another, while picking up an object. Each object placed very carefully in each square until you hit the number 10, or the final square. The more numbers, the more squares that one had to overcome on the way to getting to the final square at the end of the block. Jumping the squares was the big feat, and staying within the confines of the squares whilst trying to reach the opposite square was the highlight and what all hopped for. 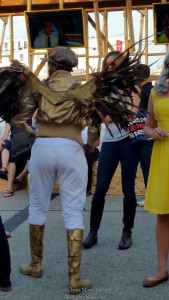 The Industry’s, HOPSCOTCH, anti-ups the game in its impeccable dictation of self; and how that self relates to others in closed quarters and, with 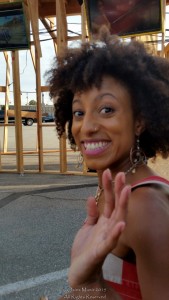 strangers. Destination unknown. Three individual routes painted out in Yellow, Green, and Red. Hopscotch uses a 36 Chapter composed Opera, giving each route, 8 Chapters of the 36. It takes approximately 90 Minutes for the complete Opera to play out, with each chapter lasting 10 minutes in each car seating a group of four. Each performer (s) assigned one Chapter giving them the opportunity to breathe life into each Chapter. The audience gets to enjoy the ride whilst changing cars and going to different destinations. The entire process of Chapters rotates eight times. In this way participants can enjoy a full 36 Chapters, no matter what stage on the counter or counter-clockwise rotated cycle, they departed from. Ten narratives of carefully selected short animated chapters are accessible at any time throughout the production. The chapters are viewable at HopscotchOpera.com

Partnered with the emerging technology of Sennheiser’s newest, tech Gizmodo, the AVX systems and hidden microphones were designed specifically and with much sensitivity using an ambient audio signal for sending back to the Central Hub. The Lavalier mic is securely planted behind a seat, in the enclosed ceiling of the limousine, a table’s underside, or right next to the person sitting. This in turn establishes connection between a wireless AVX backpack transmitter that sends a signaled receiver that is a plugged into a Samsung S5 Smartphone /camera. 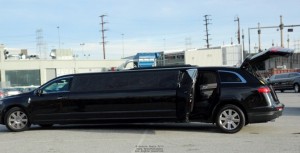 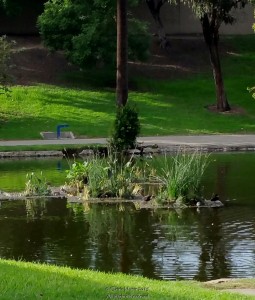 signal, which includes the Sennheiser digital, wireless audio. An interesting phenomenon is the use of Sennhieser 2000 G3 Series wireless system on the rooftops and trunks of the 24 mobile car excursion determining a clear, clean, and crisp sound for participants and talent during the ride throughout the downtown Los Angeles area.

A technical milestone happened with the use of, The Industry and Sennheiser’s  six-layered channel EM 2050 receiver and a four-channel SR 2050 IEM wireless transmitter to enclose the wide screen sound effect of sound on both the channels and live voices to create a perfectly comfortable 90-minute performance. To insure the best quality of sound three of the limousines that used the 2000 G3 Series, had Sennheiser’s, A 1031 U Passive Omni-directional antennae mounted to the limousines roof for a flawless two-way audio transmission between production staff and moving vehicles. 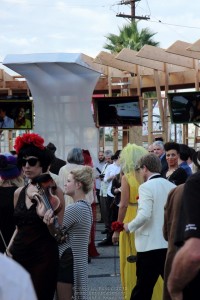 At the Central Hub with the aid of the Guideport and Momentum headphones by Sennheiser, the hub bustled with interested onlookers and performers. An HDMI set up as a receptor there routing each of the 24 A/V signals to the appropriate large LED screen monitor. Audiences are able to hear audio output for each monitor from the Sennheiser Guide port system, which widely broadcast each individual audio signal to 24 channels. Each participant received a Guide Post receiver and Keypad bringing the wonderful sounds of the corresponding numbered channels directly to their ears. All enjoyed a perfect evening at the Hopscotch Opera within the lovely confines of the Sennheiser, AVX- 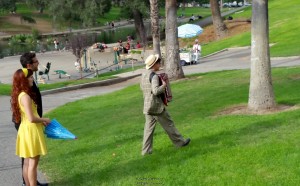 A media boost held inside SCI-Arc (Southern California Institute of Architecture) drew members of the press from far and wide.The boost gave the media direct access to HOPSCOTCH’s crew, affectionally known as, “The Industry.” 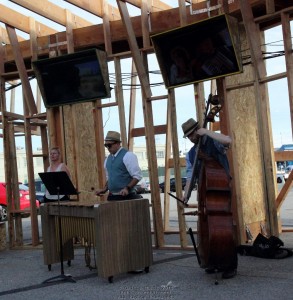 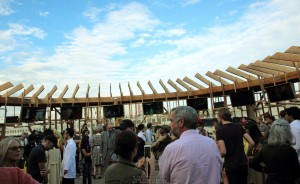 Each member of the panel explained the technical aspects and the mechanical components of, Hopscotch and expressed their heartfelt enjoyment in participating and bringing the Opera to life. Achim of Sennheiser talked up his first meeting Yuval during their Union Station resident production, “Invisible Cities.” “We loved the idea and decided to discuss how HOPSCOTCH could happen, not why it couldn’t happen.”  Neil Shaw of Menlo Scientific Acoustics was on hand to lend his support and technical advice for the event.

Invited guests and media were treated to refreshments, and the coolest keep sakes, lik 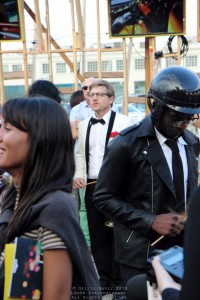 e the designed SCI-arc and Hopscotch handbooks as well as a special treat of the latest Sennheiser powered Momentum In-ear Headphones.

Fans of, The Industry and Sennheiser says Executive Director, Elizabeth Cline can look forward to an LA Philharmonic 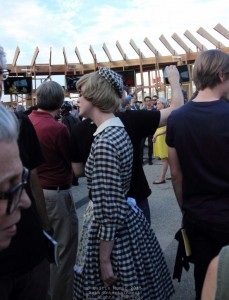 Our last words, if you plan to Hopscotch be prepared mentally, physically and spiritually to go where no Opera has ever gone before. 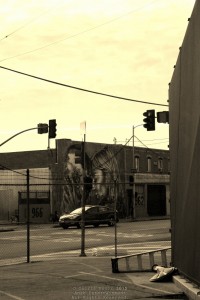 For more information on Sennheiser and The Industry’s HOPSCOTCH the Opera, please hop quickly over to Tickets for Hopscotch on-sale now at hopscotchopera.com/ticket-for-sale. www.TheIndustryLA.org. www.hopscotchopera,com.