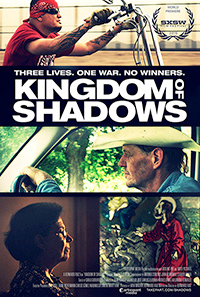 The year 2015 the place, anywhere on the streets of Monterrey, Mexico. Bernardo Ruiz born in Mexico could have never imagined that neither he nor his parents would have thought that the place they called home would become a country of violence and drug crazed militants. After Ruiz and his family moved to New York’s Brooklyn, the Director honed in on his rich Hispanic heritage and made the decision to document the important occurrences of his own culture.  Senior Homeland Security Officer, Oscar Hagelsieb, has the difficult job of busting crime offenders and keeping the Cartel from complete taking over this once peaceful country. Sister Consuelo Morales a Catholic Nun and modern day Saint has taken on the task of assisting families who have had relatives and loved ones disappear during the reign of the Cartel. The  Los Zetas, once officially hired and trained by the military as protectors of the border, now rebels against that same militia. Sister Consuelo, a heroine in her own right and Oscar Hagelsieb, should receive commendation. How did Mexico and in particular, the once non-violent city of Monterrey, come to be so drug infested? The story goes something like this. The drug lords who were once a part of a secure team of policia, merged with the under

belly of Mexico, and have become the basic components needed to continue to hold this, city under siege. Hagelsieb, with the support of the Feds, once a street saavy bad boy, is now an officer who sincerely puts his talent and life on the line. “Takes a special person to do this kind of job”, he says. Drawing from experiences and the life he led, Hagelsieb is able to forcibly put the real criminals behind bars and while working closely with Consuelo and the community.

Back some time ago the streets of Monterrey were safe for its  residents and had always served as a haven of a beautiful backdrop for a normal life, Now, those same streets bubble up a smelly odor called crime and murder. Some users, lovers of Cocaine, Heroin, Marijuana, and other illegal substances and life threatening drugs are on the rise. Sister Consuelo who wears a broad banner of hope and by working with the Feds and Oscar Hagelsieb is able to offer a small but lethal dosage of hope. Those families stricken by the sudden loss of a love one hail this woman, sister, mother, and Saint, who finds sanctity amongst the very same people who suffer because of this never

Disappearances are a task left to the heads of the cartels, and when soldiers carry out execution orders; they cannot be trusted and this can rip the very heart out of families already, and in most cases devastated by poverty. The filters between the law and community no longer exist and none hold truer than the fact of the law-abiding citizens not knowing whom to trust. I mean after all it is their sanction, and Sister Consuelo can definitely vouch for that. It must have felt like a hole in the very heart of Oscar Hagelsieb who says he feels safer in the Middle East than in Monterrey.

Don Ford, a former trafficker for the lords and buyer, now lives his

life out with his wife on a naturally sculpted land in Texas that he calls home. As for safety and security, one would wonder why the killing of your own people in your own backyard would be something that would be of benefit to anyone. The crackdown on the drug infestation is so prominently on the radar now due to the efforts of Sister Consuelo and the slim although appreciated policing of the area. In constant fear for their own lives, the inner community powered by Sister Consuelo slowly, steadily and assuredly are beginning to extend their arms out to others and scream for HELP.

Boiling Pot Productions and Quiet Pictures provided a great service in their shedding light on this horrendous situation that could eventually affect us all and even restrict our general well-being. If left unattended Monterrey could turn into to a mini Hiroshima with an unknown dark side.

In retrospect, the job of recovery has been the driving force necessary to gain more support by the city’s locals as more of the populous begins take a stand. There were

times in the history of Mexico, wherein crimes of this kind were void of action; killing only those involved in illegal and criminal, activity.  The new wave of crime lords who as disrespectful as they are, take regular citizens; and hold them hostage with no idea as to whose head or body is to be found on a doorstep first. Director Ruiz points

highlights this delivering an eloquent film/documentary, highlighting the trials and tribulations of local citizens of Mexico who put their lives on the line daily. The Mother Teresas, the Ghandi’s, the Kings, have in the past all stood for righteousness giving all power to the people, Here in this  community the likelihood and statistics of  recovered family and friends is next to none. The infrastructure is not there. Sister Consuelo and her team of supporters make large strides to accommodate the growing number of victims abducted and executed. The net of support wrapped round Sister Consuelo Morales’ tireless efforts that could possibly break a drug lord has a tremendous impact and is unbelievably endearing.

Without the pushing, pulling and tugging at the governments coat tails and its local

Perhaps Mexico and the City of Monterrey could become a carefully drafted shadow standing tall behind the backs of the lords. Their Kingdom to be taken seriously as the fight to stay alive and in control becomes more defiant over time; and isn’t that right, to fight, really what it’s all about?

For more information on Bernardo Ruiz, Oscar Hagelsieb and Sister Consuelo Morales and the “Kingdom of Shadows” reference:

Please include that the film will open at the Downtown Independent in Downtown L.A., Laemmle’s Playhouse 7 in Pasadena, and in New York and select cities around the country on November 20 (also available on VOD).