In its 8th year Bass Player Live took over S I R Studios on day one and held MIT at bass point on Sunday, 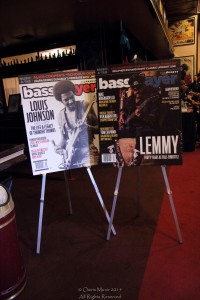 day two. The annual event set annually in the fall during the first week of November offers an opportunity for fingers who fancy playing a stringed instrument to gather and exchange culture and style amongst peers and fans. The event packed with lots of goodies for bass lovers, soon to be bassist and master bassist was even better than expected with lots of celebrities to channel their talent as loud and as pure as sound could be channeled. S I R is an established venue that has floated like a wind-blown hemmed skirt gathers around a woman’s leg in the Los Angeles / Hollywood area for many years. It has been home to the when I first got to LA and had to find a studio session musician and the famous like Chuck Rainey and Ampeg sponsored, Armand Sabal-Lecco.

Let’s just say it was a bass-tacular two days. One could feel the presence of musicians who had stepped onto the red 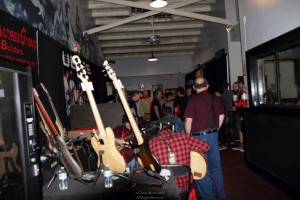 carpet, sat, stood, played, and recorded in the S I R studios. The MC, clinic designer, and BPL Artist relations manager, official host, Chris Jisi (not pronounced Yeezy) really handpicked as elegant as one could have the best of entertainers to keep the audience warmed during walk through and the changing of artist between the two clinics. It felt like old times when a band or artist hit town and set up to rehearse at a studio, everyone knew about it, The news hit the streets quicker than hard ice can crack a window and all headed over to the designated hang spot. The hang itself could last an hour, two hours or a week; it just depended on what the schedule commanded. According to Jisi clinics/studios, A & B were, re-arranged this year in order to avert the 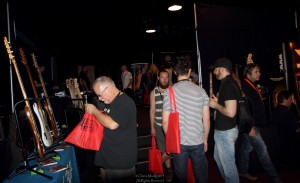 ongoing walk through traffic. The new arrangement allowed manufacturers who are beginning to have broader exposure a wider area and foot traffic additional space for walking and viewing.

A broad array of musicians who play, write, and arranged seemed eager to have an audience to share their deep filled talent. For example, Ricky Minor and Rhonda Smith interchanged time slots and both played in Clinic room B. While Chuck Rainey and Nathan East bossed it, out in Clinic room A. It was a, “had to be there to see it,” kind of situation. Each clinic was an hour mixing performances, questions, answers, and ear bending life lessons. 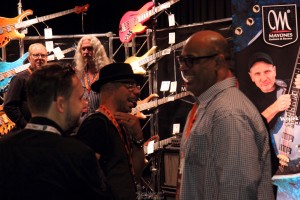 Many of the vendors gave special time 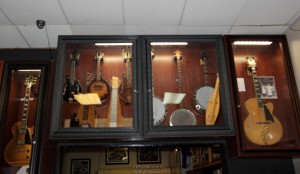 and attention to potential buyers by having an artist perform live right there on the spot in order to catch the inspirational flow of the sudden rush of endorphins that one gets when one has an eargasm.

There were lots of gasms, awws, and whoooo is thumping that Bass shared by all who attended. As an added attraction, the Award Achievement portion of the event booked out at MIT (Musicians Institute) which was not far away and an easy get to from S I R. The honored three award recipients, Louis “Thunder Thumb” Johnson, Nathan East, and Lemmy Kilmister. Just in case you unknowing folk out there don’t know who these three are, here’s a brief rundown,

Louis Johnson, elevated the art of bass playing using slapping in particular while session gigging with Michael McDonald, Michael Jackson, Quincy Jones and the Brothers Johnson, and that’s just the tip of a list of lifetime memoirs. Lemmy Kilmister, the last name alone should suggest his kill approach to metal strings. Founder, songwriter, lead vocalist of Motorhead, Lemmy, had the circle of crowns mounted in place from then on. Don’t 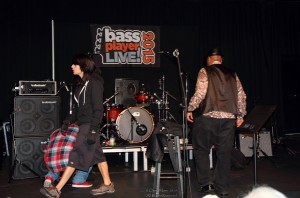 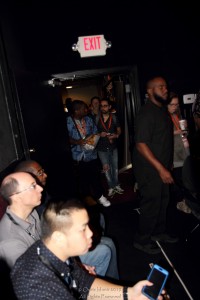 get no betta than Nathan East. When one thinks of directions, we think North, South, West, and East. In the case of East, east coast, east side, the Far East, East is synonymous with hipness, buoyancy, solitude, latitude, but mostly the East steps hard with, attitude. Nathan natural fit for siding with the boys, put the lick, the signed the font and thumped his way to the corners of the world with comrades, Eric Clapton, Phil Collins, Daft Punk, Fourplay and now solo vocalist. I mean the man was scatting and sheeza, weeza, bout lost our minds between listening to him and Master Rainey.

Special guest two-time Grammy winner and all up on the “The Bass in You,” Jerry Jemmott sat onstage front and center while his ace, Chuck Rainey,  spit wisdom from his three legged stool, mic and deep throat.  Sound and recording engineer, Bruce Wulach owner of the iconic 105 year old, Steinway, B Grand Piano sat nearby looking forward thinking back to the time when fame meant a whole lot and the boys who played together, played hard and for keeps. The natural thing happened of course bringing all together under one roof in a contained hub of contentment without one artist necessarily knowing one another. 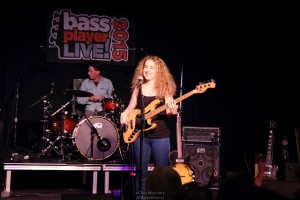 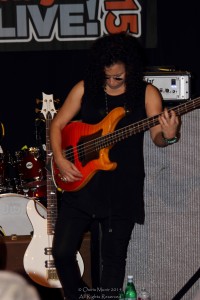 Other performers on hand to gift clinic attendees were, Juan Alderete ( sponsored by Earthquaker Devices) Janek Gwizdala, Rock Bass panel Dug Pinnick, Blasko, Mike Watt, Rex Brown, and Mike Inez. A panel featured, The History of Ampeg with Dino Monoxelos and Bobby Vega. Nearby participants, Andrew Gouche and Steve Bailey were present as well. The day was stunningly celestial and added a colorful mood to show support for players Bill Dickens, TV Bass Panel with Mike Merritt, Hagar Ben Ari, Jimmy Earl (sponsored by Elixir) Turn It Up Reflections on 30 Years of Amp-building with Mark and Dan Gooday. A treat for a sweet tooth was baby girl bassist standing tall with the big boys and BPL, “Young Gun Award,” winner, Australian Tal Wilkenfeld, Andre Berry, and Ben Kinney. Tal is considered one of the best female bass players in the world having thumped on stage with Herbie Hancock, Jeff “Tain” Watts, Jeff Beck and Chick Corea, a small group amongst many.

Alex Al, and “Ready Freddie” Washington were nice and tight on set as well as having being lifted by the doc, Memphis born, Saxophone player, Donald Hayes.
Nathan’s set left a deep imprint on the heart with drummer, “Felix the Cat” purring the sticks so sweet that even the finest ear had to bow down. 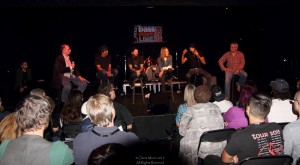 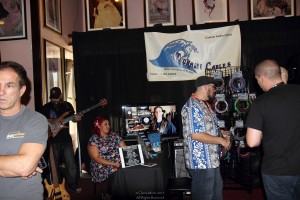 The summation of the two days put some ju ju in our head, some lickety split in our steps and gave us the opportunity to sit and hear the planets finest, and that my fellow music lovers tain’t nothing to be playing with.